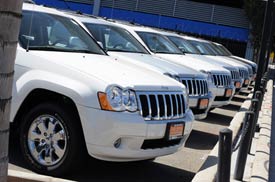 Last week, the House Financial Services Committee voted to establish a new Consumer Financial Protection Agency. The agency would have broad authority – but thanks to fierce lobbying, it’ll also have big gaps. Consumer advocates point to an exemption for auto dealers as one that’s particularly worrisome.

An amendment stripped auto dealers from the proposed agency’s oversight. With strong backing by the powerful dealer lobby, and despite the White House’s attempts to kill it, the amendment easily passed in the committee, 47-21. Nearly half of the panel’s Democrats voted for the amendment along with the committee’s Republicans, who’ve generally opposed the new agency.

The exception for auto dealers sets up an odd situation: Many of the larger financial institutions that provide auto loans will be under the new agency’s supervision, but that supervision would stop at the dealer’s door. That’s more than a technicality, consumer advocates say, because some dealers exploit their role as the middleman between the consumer and the loan.

Those dealers tack on unnecessary fees and steer customers into higher-cost loans, splitting the difference with lenders. "The buying process itself is intentionally structured to be needlessly complicated and time-consuming to wear down and confuse car buyers," said John Van Alst of the National Consumer Law Center.

About half of auto buyers finance their purchases through their dealers, but that proportion is even higher for families with lower incomes, said Van Alst, and minorities are particularly at risk. In a letter to the committee’s leadership this month, the Consumers Union, the NAACP, the National Consumer Law Center and more than 30 other groups argued against the exemption, pointing to a pattern of abuses.

Steve Adamske, spokesman for the committee chairman, Barney Frank, who voted against giving dealers an exemption, said that Frank shared those concerns, but he also "understood the political forces behind the amendment. He wants consumer advocates to go to work and change the votes."

The National Automobile Dealers Association – which contributed $2.86 million to members of Congress during the 2008 election cycle – has argued that current regulation of dealers is adequate. David  Westcott of NADA went further in a statement praising the amendment, saying that adding  regulation for dealers was unfair, because they "had absolutely nothing to do with the credit crisis."

But the purpose of the new agency goes beyond just targeting those most responsible for the country’s financial collapse, said Travis Plunkett of the Consumer Federation of America. "The goal of this agency is to protect consumers. And that means looking at abusive lending of all kinds."

It seems that consumer advocates have an uphill battle. Beyond their substantial financial contributions, dealers are often prominent constituents in members’ districts. The dealer lobby last showed its influence  after General Motors and Chrysler closed thousands of dealerships as part of their bankruptcies. Lawmakers lobbied the administration about the move, and the House even passed a measure to force the automakers to reopen the dealerships. The push eventually wilted because of continued opposition from the White House, which argued that the car companies wouldn’t survive without the closings.

We’ll continue to track the progress of financial reform efforts as they move forward.