The Census Bureau is scrambling to respond to a last-minute request by the Justice Department to add a question on citizenship status to the 2020 census, according to hundreds of pages of emails obtained through a Freedom of Information Act request.

The emails show that the DOJ’s December request set off a flurry of activity in the bureau as career Census officials hurried to research the history of how citizenship has been handled in past surveys, raced to come up with alternatives to the DOJ request and vented their frustration over public outrage on the issue.

As ProPublica first reported, the DOJ asked for the question to be added in a December letter, saying it needed more data to better enforce voting rights laws. 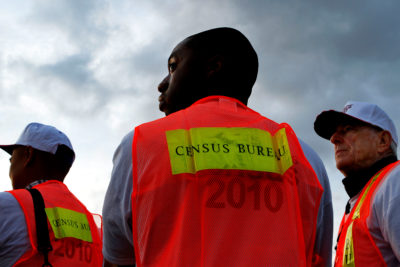 “This is a recipe for sabotaging the census,” said one. The administration’s stated reason for the controversial move: protecting civil rights.

That created a firestorm, with civil rights groups, congressional Democrats and state attorneys general opposing the new question. They worry it would sow fear among immigrants and depress response rates. The once-a-decade census, which aims to count everyone residing in the U.S. regardless of citizenship status, determines not only how seats in Congress are distributed around the country, but also where the federal government spends hundreds of billions of dollars.

Others, including prominent Trump ally and Kansas Secretary of State Kris Kobach, have come out in favor of adding the citizenship question. In a Breitbart op-ed in January, Kobach argued, “A great nation must, at the very least, know how many citizens it has.”

In the newly obtained emails, Census officials discuss concerns that the public has lost faith in the census. Ron Jarmin, a veteran career official who is acting director of the bureau, and another official corresponded about a statement by the bureau’s National Advisory Committee that the census is in “crisis” because of concerns about confidentiality of data.

In January, the Census Bureau’s Associate Director and Chief Scientist, John Abowd, emailed colleagues a document with “four alternatives” in response to the DOJ’s request to add a citizenship question. The emails are heavily redacted and it’s not clear what those options are.

Jarmin also set up a meeting with the Justice Department about its request last month.

At one point, Jarmin responds to a CNN column raising the alarm on the citizenship question with the comment, “The lack of understanding and hysteria are amazing.”

Asked about the comment, a Census spokesman said, “We’re not insensitive to how stakeholders feel” and that Jarmin felt some news coverage has not conveyed that smaller surveys conducted by the Census already ask about citizenship status.

The spokesman said the bureau, which is part of the Department of Commerce, is still studying the request to add a citizenship question. Secretary of Commerce Wilbur Ross has authority to make the final decision, which is expected by the end of March.

Do you have information about the Trump administration and the census? Contact Justin at [email protected] or via Signal at 774-826-6240.