A Chicago psychiatric hospital that has faced repeated allegations of abuse and neglect of patients has closed, although a spokesman for the hospital said Friday the move is temporary.

Once one of the largest behavioral health providers in Illinois, Chicago Lakeshore Hospital in Uptown discharged its last patient this week and notified employees of the closure, the spokesman said.

The hospital cited COVID-19 in its decision to close, but Lakeshore was under scrutiny long before the current pandemic. ProPublica Illinois first published an investigation in late 2018 revealing allegations of sexual assault and abuse of children there, as well federal and state inquiries into safety violations. The Chicago Tribune separately reported on troubling conditions at the hospital.

Hundreds of children in state care used to pass through the hospital.

For years, the Illinois Department of Children and Family Services relied on Lakeshore to treat state wards with serious mental illnesses. But some of those children reported being abused. Children also remained at the hospital after they had been medically cleared for discharge because the state agency was unable to find them placements.

DCFS stopped sending children to Lakeshore in 2018 following the news reports and after the American Civil Liberties Union of Illinois took the agency to federal court over the issue.

Lakeshore can appeal the termination or reapply for its Medicare certification, provided it can show “reasonable assurance” that the reason it was terminated no longer exists and will not recur. A spokeswoman for CMS said Friday that the federal agency has not received an application from the hospital and has not been made aware of any appeals.

“In the midst of the COVID-19 pandemic, the trajectory to recertification has understandably been delayed while officials focus on the crisis at hand,” Chipparoni said. “When Illinois has turned the corner on COVID-19, we will revisit when and how quickly we can again meet that need.”

Hospital officials have previously said their top priority was “the health and safety of the children we treat.” Chipparoni said Lakeshore has been a “safety net in its community and Illinois for almost 60 years. Our mission to provide quality access to underprivileged and often forgotten populations remains resolute, but on hold.”

Chipparoni declined to say when the hospital planned to reopen or what steps would need to occur before that could happen, but he said hospital officials were evaluating their options.

Charles Golbert, the Cook County public guardian, was surprised by the news of the temporary closure. Golbert filed a federal lawsuit in December calling Lakeshore a “hospital of horrors” where children were sexually abused, attacked and sedated. 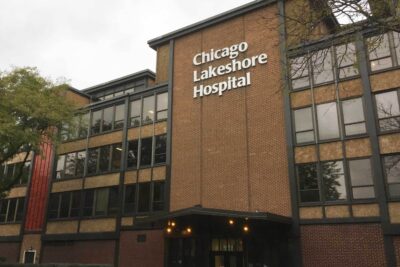 The hospital’s CEO at the time said she would “vigorously defend Chicago Lakeshore Hospital using facts rather than the egregious distortion that has been portrayed before the press” and said a lack of state funding prevented children from “getting appropriate care at the right time and in the right place.”

“It’s unfortunate in that I feel the situation might have been salvageable if strong and decisive action had been taken two years ago when all of the problems first came to light,” Golbert said in an email, adding: “Chicago Lakeshore was also resistant to meaningful review and change. And all the while children continued to be harmed there.”

In January, the Illinois Department of Public Health moved to revoke Lakeshore’s license, citing its “substantial and continued failure” to comply with licensing requirements. Multiple inspections dating to 2018 found repeated deficiencies that put patients’ health and safety at risk, according to federal records. Lakeshore responded to the state by requesting a hearing to appeal. A prehearing call is scheduled for next month, though it’s not clear what bearing the decision to temporarily close the hospital will have on the revocation process.

An IDPH spokeswoman said Friday the department had not received word from the hospital that it planned to close.

State Rep. Greg Harris, a Chicago Democrat whose district includes the hospital, was among the lawmakers who demanded an independent review of the hospital following ProPublica Illinois’ investigation in 2018. On Friday, Harris said he would be interested in maintaining the hospital as a resource for the community, patients and employees if there was a way to ensure quality care.

“It had served the community well, but in the last couple of years, as you guys have reported, it just had so many problems and so much mismanagement and so much harm was done there,” he said.