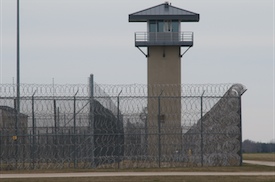 As we have reported throughout the year, the Obama administration has been serially hampered in its efforts to shutter the prison at Guantanamo Bay, Cuba. It underestimated the time needed to close the facility and was unprepared for Congressional opposition.

Finding countries to adopt detainees has proven difficult, and only this month did the administration locate a prison to move detainees into once Guantanamo closes.

Meanwhile, a front-page piece in yesterday’s New York Times suggested that Guantanamo won’t be closed “until 2011 at the earliest.” As the Times notes, the administration has had trouble getting the necessary Congressional funding to purchase and upgrade a prison in Illinois where as many as 100 detainees may be moved.

This is not where the Obama administration imagined it would be 11 months ago, when the president signed an executive order to close the prison at Guantanamo Bay by January 2010.

That day, the president set in motion an interagency task force to determine which detainees could be released and whether any could be prosecuted. Obama suspended the Bush-era military commissions on Guantanamo Bay and administration officials emphasized a preference for prosecutions in federal court.

But in nearly a year, only one detainee has been charged in federal court and the military commissions have been revived.

In November — 10 months after Obama signed the executive order — Attorney-General Eric Holder announced that another five detainees would face federal charges in the Southern District of New York for their alleged roles in the Sept. 11, 2001, terrorist attacks.

Only now is a federal grand jury considering charges for the five. And with no trial yet under way, it could be years before the Justice Department secures the conviction of a single detainee.

Even after Guantanamo is closed, some detainees will be held indefinitely, without charge or trial, as they were under former President Bush. Like the Bush administration, Obama administration officials have cited the same legal authority — the 2001 Congressional Authorization for Use of Military Force — as the legal basis for prolonged detention.

A look at where we are now: