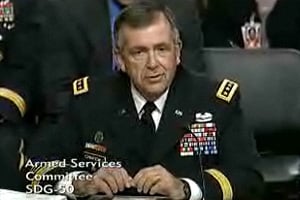 WASHINGTON, D.C.—Senators pressed senior military leaders today to improve their efforts to address traumatic brain injuries, suicide and other wounds suffered by soldiers returning from the wars in Iraq and Afghanistan.

Responding to what he called "disconcerting" reports by NPR and ProPublica, Sen. Carl Levin, D-Mich., said at a hearing before the Senate Armed Services Committee that the military needed to better address the wide range of medical and behavioral problems affecting troops.

Earlier this month, we reported that the military was failing to diagnose and adequately treat troops with brain injuries. Since 2002, official military figures show more than 115,000 soldiers have suffered mild traumatic brain injuries, also called concussions, which leave no visible scars but can cause lasting problems with memory, concentration and other cognitive functions.

But the unpublished studies that we obtained and the experts that we talked to said that military screens were missing tens of thousands of additional cases. We also talked to soldiers at one of the military's largest bases, who complained of trouble getting treatment.

"I am greatly concerned about the increasing number of troops returning from combat with post-traumatic stress and traumatic brain injuries, and the number of those troops who may have experienced concussive injuries that were never diagnosed," Levin, chairman of the committee, said as he opened today's hearing.

Gen. Peter Chiarelli, the Army's vice chief of staff, said the Army had made strides in identifying soldiers at risk of committing suicide, setting up new treatment centers and deploying a new system of "telemental health services," allowing soldiers to talk with counselors by computer video chat programs.

Chiarelli's remarks were echoed by other senior military commanders at the hearing from the Navy, Air Force and Marine Corps.

"Our success notwithstanding, we still have much more to do," said Chiarelli, who has emerged as the Army's point man on mental health issues. "We face an Army-wide problem that will be only be solved by the coordinated efforts of our commanders, leaders, soldiers and program managers and health providers. This is a holistic problem with holistic solutions and that is how we're approaching it."

Chiarelli took issue with our reporting, however. He said the NPR and ProPublica reports were wrong to blame military doctors for failing to diagnose the problem, or to accuse senior military officials of not taking the issue seriously. He also said that NPR and ProPublica had tried to draw a distinction between traumatic brain injury, or TBI, and post-traumatic stress, or PTS, two conditions which frequently occur together.

"I think the great disservice that NPR did to everyone was to try to isolate TBI from PTS. And that is just not possible," Chiarelli said. "The co-morbidity of these two is what's giving us the difficulty today. And I also think that they did a disservice when they indicated that PTS is a psychological problem. It's not just at a psychological problem. It is a physical injury that occurs."

Chiarelli did not cite any factual errors in the stories and we stand by our reporting. But we also think he is mischaracterizing our reporting, which was based on dozens of interviews with senior military researchers, commanders and soldiers, and thousands of pages of unpublished studies, e-mails and medical records.

First, we did address the overlap of TBI and PTSD in our stories: "To be sure, brain injuries and PTSD sometimes share common symptoms and co-exist in soldiers, brought on by the same terrifying events," we wrote.

We also did not downplay the seriousness of PTSD -- a wound which NPR has reported on extensively in past stories.

We found several instances in which military doctors expressed skepticism about mild traumatic brain injury and its effects. Dr. Charles Hoge, one of the Army's senior health advisers, referred to the "illusory demands" of mild traumatic brain injury in an opinion piece in the New England Journal of Medicine last year. In an April 2010 e-mail that we obtained, he wrote: "What's the harm in missing the diagnosis of mild TBI?" In an interview, Hoge told us that he was concerned with treating soldiers' symptoms, no matter the cause.

We also turned up extensive evidence that military doctors weren't diagnosing mild traumatic brain injuries, both on the battlefield and when troops came home. Battlefield medics, overwhelmed by life-threatening wounds, can miss the signs of concussions. Screening tools now in place often fail to catch soldiers who have suffered concussions. Soldiers often try to hide their symptoms to return to battle with their comrades.

One of the Army's senior neuropsychologists told us of examining five soldiers who had survived a rocket attack in Iraq last year. Medical staff had treated their visible wounds, but failed to diagnose them as suffering from mild traumatic brain injury -- even though they were suffering "classic" symptoms, according to Lt. Col. Mike Russell.

It is important to diagnose mild traumatic brain injury and quickly provide treatment for any lingering effects, according to the Pentagon's own experts. While the majority of soldiers recover quickly from concussions, some report lasting mental and physical problems. Studies show that such soldiers can be helped by providing cognitive rehabilitative therapy, an intensive program to retrain the brain to perform mental tasks.

Sen. Mark Udall, D-Colo., asked Chiarelli several questions about the military's efforts to improve how it diagnoses traumatic brain injury. Afterwards, he said that he appreciated Chiarelli's efforts, but planned to continue pressing Army officials on the issue.

Udall "remains concerned about the impact of TBI and PTSD on our service members," Tara Trujillo, a Udall spokeswoman. "As discussed at the hearing, there is much still to learn, different approaches to take and ways to continue to improve."

After the hearing, Levin said he was convinced that the services were trying to properly diagnose mild traumatic brain injury.

"I remain concerned about the diagnosis of traumatic brain injuries, and especially of mild traumatic brain injuries, but it is not for lack of the services trying to do the best they can with existing science, tools, and methods," Levin said in a statement. "There is still much to be learned in both the military and civilian medical environments about the diagnosis, treatment, and care of traumatic brain injury, and its relationship to other combat-related injuries such as post traumatic stress. I believe each of the services is taking the issues of detection, tracking, and follow-up care very seriously, but there is still work to be done."