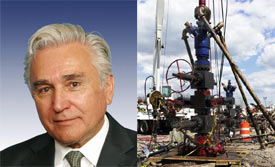 Five years ago the U.S. Environmental Protection Agency assured the nation that the technology credited with opening vast new natural gas supplies was safe. Now Congress has ordered the agency to take another look.

As part of the $32 billion Interior and Environment Appropriations Bill recently signed by President Barack Obama, lawmakers asked the EPA to revisit hydraulic fracturing, the process where copious amounts of water and sand mixed with toxic chemical additives are furiously pumped underground to break up gas-bearing rock thousands of feet below.

The bill urges the EPA to use a portion of the money to fund a scientifically robust and peer-reviewed study of the relationship between hydraulic fracturing and drinking water, "using a credible approach that relies on the best available science."

The EPA gave hydraulic fracturing its stamp of approval in a 2004 report, but that study has been widely criticized as politically motivated and scientifically unsound. After the report was released, veteran EPA scientist Weston Wilson wrote a letter to Colorado representatives saying that "based on available science and literature, EPA’s conclusions are unsupportable." He also wrote that five out seven members of a panel that reviewed the findings had conflicts of interest and "may benefit from EPA’s decision not to conduct further investigation or impose regulatory conditions."

In 2008 ProPublica reported that EPA staff involved in the study negotiated directly with Halliburton, one of the leaders in the hydraulic fracturing business, and other stakeholders to soften inspection pressure from the agency. In exchange, the companies agreed to voluntarily stop using diesel fuel for some of their fracturing processes.  That report was part of an investigation showing that water sources have been contaminated across the country from drilling.

The 2004 study was used to help justify the passage of an amendment in the 2005 Energy Policy Act that  exempted hydraulic fracturing from coverage under the Safe Drinking Water Act.

Ever since, environmentalists and some Democratic members of Congress have been pushing for a reversal.

The new request for a study of fracturing is just one paragraph, deep in the 393-page bill that funds everything from drinking water infrastructure to Great Lakes conservation, and it does not specify an amount of money to be spent on the study.

The office of EPA administrator Lisa Jackson did not respond to requests for comment for this article. But the measure’s sponsor, Rep. Maurice Hinchey, D-N.Y., says he expects the EPA to follow through. "I don’t think that there is any question that they are going to move forward on it," said Hinchey, adding that Jackson has indicated this to him directly.

Jackson previously said she recognized that the current regulations restrict the EPA's ability to protect groundwater and said the issue "was well worth looking into." But she hadn’t indicated how the EPA would approach the problem or whether the 2004 study would be revised.

The request for a new study comes six months after a matching pair of bills called the FRAC Act was introduced in the House and the Senate. The Fracturing Responsibility and Awareness Chemicals Act – sponsored by Hinchey, among others ­– would repeal the oil and gas industry’s exemption from the Safe Drinking Water Act.

It’s not unusual for a study to be introduced as a way of delaying legislation. But Hinchey says this study serves a real purpose because there is a dearth of scientifically neutral information about hydraulic fracturing.

"We are very sincere and deeply dedicated to getting this done," he said.

UPDATE: After this story was published, the U.S. Environmental Protection Agency sent the following response to ProPublica's questions: