Editor’s Note, Dec. 11: This updates a story published on Nov. 14 by ProPublica and the Malheur Enterprise that was based on an incomplete set of data provided by Oregon’s Psychiatric Security Review Board. The board initially provided the names of 334 people it released from 2008 to 2017. In fact, the board freed 526 people during those years. Looking at the full records, we found that the criminally insane committed new crimes and harmed others more often than we had initially calculated. An updated version of the Nov. 14 story can be read here. The original can be found here.

People freed by Oregon officials after being found criminally insane are charged with new felonies more often than convicted criminals released from state prison, with family members and first responders often the targets of violence, a new analysis by the Malheur Enterprise and ProPublica shows.

All told, 23 percent of people freed by the state’s Psychiatric Security Review Board are charged with felonies within three years of their release, compared with 16 percent of those released from Oregon prisons.

The recidivism rate is higher than has been previously reported and reflects new data released by the Psychiatric Security Review Board to the Enterprise and ProPublica. The new figures also show the risk to the public is greater than previously understood, with more than 300 people attacked by those who were released over the last decade.

In November, the Enterprise and ProPublica reported that the rate of new criminal charges was roughly similar among those released from oversight by the board and those freed from prison. That was based on data officials provided this year when the Enterprise requested the names of everyone freed by the board in the last decade and searched public records to establish how many had been arrested.

A week after publication, the board’s executive director, Alison Bort, told the newsrooms that officials had not, in fact, shared the identity of everyone it had discharged from state custody. (The board turned over information in two batches. The data for the years 2013 to 2017 included the identities of everyone the board had released. For 2008 to 2012, the board provided only the names of people for whom they granted early discharge, not those released once they completed the sentences they would have served had they been found guilty in criminal court.)

Within a day, the board gave the Enterprise the missing names for 192 people who successfully pleaded insanity in a felony case and were later freed by the state. As we did with the earlier names, we searched public records to identify those who were charged with new crimes.

The Enterprise and ProPublica began researching the outcomes of Oregon’s criminal insanity system last year to answer questions raised by a high-profile criminal case. After almost 20 years under the board’s supervision for a kidnapping case, Anthony Montwheeler claimed he had faked mental illness to avoid prison. Board members accepted that assertion, which was supported by medical experts, and freed him from state custody in December 2016. Less than a month later, prosecutors say, Montwheeler kidnapped and murdered Annita Harmon, an ex-wife, and then killed David Bates in a head-on collision. Montwheeler has not entered a plea. He was returned to the Oregon State Hospital this fall for mental health treatment to restore his capacity to stand trial on charges of murder, kidnapping and assault.

State officials called Montwheeler’s situation a rare case. But when the Enterprise asked how often people freed by the Psychiatric Security Review Board commit new crimes, state officials said they have never tracked it. The board has instead touted the low recidivism rate of people still under its supervision. Many psychiatrists, mental health advocates and legislators told the Enterprise in interviews that they believed the low recidivism rate cited by the board on its website — less than 1 percent — included people who had been freed by the board.

After we published the results of our initial review last month, Attorney General Ellen Rosenblum, Senate President Peter Courtney and other state leaders have called for more study of the issues and potential changes to Oregon law.

The new data released by the board and analyzed by the Enterprise shows that the outcomes are even worse than the first figures that triggered such a response from lawmakers. 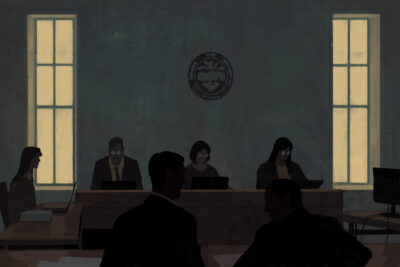 Among those freed by the board and charged in new crimes, about two-thirds were accused of violent crimes. The cases ranged from a misdemeanor arrest for hitting a stranger with a water bottle to a man who was ultimately sentenced to life in prison for murdering a family friend with a ball-peen hammer. Over the last decade, 321 people were attacked by someone freed from state monitoring by Oregon’s criminal insanity system, records show.

Defendants are sent to treatment instead of prison if a judge or jury decides that a mental disorder prevented them from understanding and following the law. In Oregon, such people are placed into the custody of the Psychiatric Security Review Board, a five-member panel of legal and mental health experts appointed by the governor. Most start their care at the Oregon State Hospital. At the recommendation of doctors and with approval of the board, they can be moved into community treatment programs and gradually granted more freedom as they prove that they can safely manage their disorder.

Our analysis found that 71 percent of people who successfully plead insanity are released from the board’s supervision when they reach the maximum prison sentence they would have served had they been convicted. Oregon law gives the board no discretion in such cases. Even if doctors believe a person is still ill or dangerous to themselves or others, the board must end its oversight when time in treatment reaches the potential prison term.

The board can and does free people earlier if officials decide they no longer have a qualifying mental disorder or if the board believes they are no longer dangerous because their illness is under control.

In total, the board freed 526 people from Jan. 1, 2008, to Dec. 31, 2017, and 187 of them have been charged with new crimes. Most were charged with new crimes within two years of their release. (When calculating recidivism rates, we looked at what happened during the three-year period after people were freed, which is the standard approach among scholars and states. Our tally of the number of people harmed included anyone attacked by a person released by the board over the 10-year period.)

First responders were the most often injured in these cases. At least 75 police officers or EMTs were punched, kicked or bitten, usually when called to help someone in a mental health crisis or when arresting them for another crime.

An additional 62 people hurt by those released by the board were strangers or service workers harmed in a public place, like a restaurant or gas station. One man was upset about a grocery store employee taking away his bowl of soup, so he grabbed a patio chair and threw it through the window, shattering glass over other diners.

Family members and roommates were also attacked, some in cases where they had a protective order barring the person from coming near them. Freed insanity defendants beat, raped or killed at least 44 people with whom they lived or had familial ties, our analysis found.

Almost 40 percent of people accused of new crimes were sent for mental health treatment so they could understand the proceedings in their new cases. And 15 of them were deemed “guilty except for insanity” again and returned to the Psychiatric Security Review Board’s custody.

Bort and members of the board declined to answer emailed questions about the new findings and whether they suggest a need for reform. She did, however, provide an emailed statement.

“Unfortunately, we are not in a position to corroborate your findings as accurate or inaccurate at this time due to an unfamiliarity with the methodology and statistical analysis you used, which is of utmost importance when accounting for the nuances of both the mental health and criminal justice systems,” Bort wrote.

Over the last few months, the Enterprise talked with Bort several times about the findings and how the analysis was done, which follows the methodology of academic, peer-reviewed studies. Aspects of our analysis reflected issues she raised during those conversations.

Bort declined to say whether the agency would suggest changes to law or change any of its policies as a result of the Enterprise-ProPublica analysis.

When deciding whom to free from custody, Oregon law says, “The board shall have as its primary concern the protection of society.” Bort said the agency “must evaluate and prioritize those statutory mandates,” and she referred to her previous statements that the board lacks the resources to track the conduct of people it releases. The board’s primary duty, she has said, is to the clients it supervises.

“We invite discussion from our community partners and stakeholders, members of the public, and legislators who may have additional questions or who have expressed concerns in response to your findings,” Bort said in her most recent statement.