The young woman’s water broke late one morning in August 2014, as she stood in the bathroom of her home in rural Kentucky.

Her mother rushed her to the emergency room at Jewish Hospital Shelbyville. She signed a slip at the front desk, listing her chief complaint as “labor.”

But Jewish Hospital had closed its obstetrics department eight years earlier. “We don’t deliver babies here,” the nurse told the woman over the phone, not realizing that she was calling from inside the emergency room, a government inspection found.

With no help offered, the woman and her mother went to a nearby gas station and called 911. An ambulance took her to a hospital 24 miles away, where she delivered a baby girl via C-section.

Under the federal Emergency Medical Treatment and Labor Act, or EMTALA, every U.S. hospital with an emergency room has a duty to treat patients who arrive in labor, caring for them at least until the delivery of the placenta after a baby is born.

But 30 years after EMTALA was passed, hospitals — particularly those in rural areas without obstetrics units — are still turning away women in labor.

A review of federal inspection reports shows that at least 20 rural hospitals around the country have been found in violation of EMTALA over the last five years — including Jewish Hospital Shelbyville. In several cases, women suffered serious complications after being turned away, or were misdiagnosed at facilities that lacked specialists in obstetrics.

A hospital in Willows, California, was cited and fined in October 2013 for not recognizing that 29-year-old Martha Guzman had preeclampsia, a dangerous pregnancy complication. Guzman suffered seizures later that night and was rushed to a different hospital, where she delivered a stillborn boy. She died the next day.

Some ERs not only denied treatment to women in labor, they also would not help them transfer elsewhere, records show. A woman turned away by Monroe County Hospital in Forsyth, Georgia, ended up calling 911 from outside the dialysis center across the street. Another woman, told there were no staff gynecologists at a Hartford, Kentucky hospital, called an ambulance from a grocery store parking lot.

It’s unknown how much such lapses contribute to the nation’s burgeoning rates of maternal mortality and serious pregnancy-related complications, but inadequate care and misdiagnoses clearly play some role, experts say. 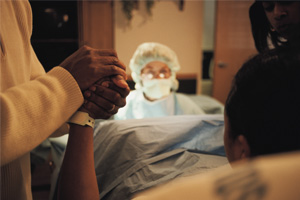 Do you know someone who died or nearly died in pregnancy, childbirth, or within a year after delivery? Please tell us your story.

EMTALA was passed primarily to ensure that emergency rooms couldn't refuse patients because they couldn't pay for services. Prompted by a catastrophic case in which a pregnant woman was turned away from two California hospitals that believed she had no insurance, the provisions outlined in EMTALA specific to labor reflected that a growing number of hospitals, especially in rural areas, had begun eliminating obstetrics departments because of high costs and a lack of doctors.

EMTALA has not reversed this trend. “The availability of OB services in rural areas has steadily declined since the beginning of EMTALA in 1985,” notes Dr. Todd Taylor, a longtime emergency room physician and EMTALA compliance consultant.

A study by The Walsh Center for Rural Health Analysis shows the portion of non-metropolitan counties without hospital-based obstetric services grew from 24 percent in 1985 to 44 percent in 2002, pointing to EMTALA as one reason why. Another study by the University of Minnesota Rural Health Research Center found that 7 percent of hospitals in nine states with large rural populations closed their obstetrics units between 2010 and 2014.

An official at the Centers for Medicare and Medicaid Services said that the agency does not track whether hospitals drop obstetric services or if the number of EMTALA violations at hospitals without such services has grown.

The EMTALA violation at Jewish Hospital Shelbyville prompted CMS to cite the hospital for placing patients in “immediate jeopardy,” warning that if it did not swiftly fix the problems in its emergency room, it could lose Medicare funding.

“This was an existential threat,” said Dr. Peter Hasselbacher, who conducts research and writes about state health policy for his web site, the Kentucky Health Policy Institute. Government health programs cover over 75 percent of Jewish Hospital’s patients, he added.

The hospital, which is part of KentuckyOne Health, the state’s largest health system, says it has made the required changes.

The hospital’s commitment to handling emergency deliveries hasn’t been tested, however. Since the case in August 2014, it has not delivered a baby, Mackovic said.

Dealing with emergency deliveries tests rural hospitals in several ways, experts say. These cases create tough decisions for all practitioners, but especially those who see a lower volume of patients and have less experience.

Active labor can be hard to diagnose unless it is obvious, and the process can take hours, said Dr. Shailey Prasad, an associate professor at the Department of Family Medicine and Community Health at the University of Minnesota. Doctors in rural communities who perform few deliveries should use simulations to maintain their skills so they’re ready when emergencies arise, he said.

Pregnant women in rural areas face a host of risk factors, including inadequate prenatal care, higher rates of tobacco and alcohol use during pregnancy, and fewer choices of providers and health care plans, according to the Center for Rural Health at the University of North Dakota. The American Congress of Obstetricians and Gynecologists says rural women experience slightly higher rates of hospitalizations due to complicated pregnancies.

Jennifer Boomer Trammell lives in remote Alpine, Texas (population 6,000). Last year, when she was pregnant with her second child, she saw the first obstetrician/gynecologist to come to town, but also traveled eight hours to Dallas for prenatal examinations starting at the 30-week mark of her pregnancy. She had severe complications during the delivery of her first child, now three and a half years old; the baby had to be medevaced to a hospital with a neonatal intensive care unit.

“It opened my eyes to how naive I was to give birth in a place like this,” she said. “I’m hyper-aware of how dangerous it could be.”

She stayed in Dallas three weeks before the birth of her second child and six weeks afterwards. “I just don’t want to take that risk,” she said back in July, when she was making arrangements.

Some rural hospitals singled out for EMTALA violations have since made concerted efforts to change their approach. Harlan County Health in Alma, Nebraska, was cited for an incident in 2011 when an emergency department staffer told the boyfriend of a woman in labor that the hospital didn’t do deliveries and didn’t have a maternity ward, prompting the couple to leave.

The hospital itself reported the problem and, in response to the citation, hired a consultant to update its policies, gave the staff a half day of training on EMTALA, and purchased new equipment to be more prepared for emergencies, said Manuela Wolf, now Harlan’s CEO. The hospital also has a telemedicine system that allows practitioners elsewhere to guide hospital staff members through deliveries via live stream. Harlan has delivered four babies since the incident.

But not all facilities have followed suit, even if staffers are well aware of EMTALA’s requirements.

Government inspectors cited East Texas Medical Center Carthage in Carthage, Texas, for a July 2012 incident in which a staffer told a woman in labor that the hospital didn’t have obstetric services or an obstetrician, and didn’t know where ambulances were stationed to transfer her elsewhere. She and her husband tried to drive themselves to another hospital, but their car broke down, the inspection report said. An ambulance took them to the facility, where she delivered by C-section, but the baby died shortly thereafter.

As part of their investigation, inspectors turned up an email from one Carthage staff member to another, noting this was not the first time the medical center had turned away an emergency delivery.

“That very scenario is why we have the EMTALA law, and this,” the staff member wrote, referring to the July 2012 case, “was an EMTALA violation.”

Officials at East Texas Medical Center Carthage did not respond to questions about these incidents.

Experts say hospitals need to do a better job of upholding their obligations to women in labor, even if they’ve closed their obstetric units.

“It is hard to understand the legal requirements in an emergency room and many physicians have a mental block when it comes to the law,” said Dr. Larry Weiss, a physician, lawyer and University of Maryland professor of emergency medicine. “But ignorance of the law is no excuse.”