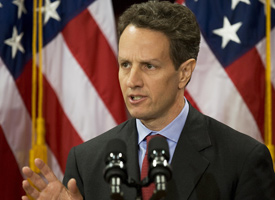 It looks like we'll just have to keep waiting to hear the details of the Financial Stability Plan, the Obama administration's chosen sobriquet for the bailout. Treasury Secretary Tim Geithner's remarks this morning followed the general outlines we'd expected, but details were hard to come by.

We do, however, know the url for a new Web site Treasury is launching to serve as a clearinghouse on bailout info. For now, details are scarce on that, too. Geithner promises that on the new Web site:

In the meantime, until that new site is up and the Treasury rolls out the details of its new programs, we'll just have to wait, but, as always, you can see our up-to-date list of the companies that have gotten bailout money.