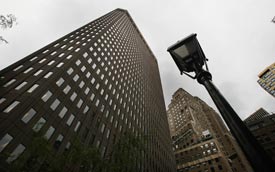 Goldman Sachs has proved once again that it knows how to make money. Wednesday’s announcement of a record quarterly profit of $3.44 billion ($) has spurred debate over how the bank did it.

In addition to making money via its own trades, Goldman profits by advising clients about deals. Some of that advice has proved quite savvy.

As we reported last year, one of Goldman’s money-making strategies was to encourage some clients to bet on declines of the creditworthiness of a range of states — including California, New Jersey, New York and Florida. Goldman advised hedge funds to take the bets by buying credit default swaps, the insurance-like financial instruments that have been blamed for contributing to the financial meltdown last fall.

The strategy angered California Treasurer Bill Lockyer because his state was paying Goldman millions to help market the same bonds that Goldman was advising other clients to bet against.

This week’s announcement of huge profits — and the likelihood of near-record bonuses — at Goldman led us to wonder how much investors could have earned by following Goldman’s controversial advice.

For bets on credit a downgrade of New York, the profit would have been 575 percent, according to data provided by Markit, which tracks credit default swaps.

Of course, there are lots of caveats buried in these numbers. Notably, the prices assume that someone would want to buy the swaps, and that they would have the cash to do so.

But fundamentally, it looks as if Goldman was right to advise clients that betting against states was a good way to make money. California didn’t like it because, as Lockyer’s spokesman said at the time, drumming up bets against California bonds could further undermine confidence in the state’s ability to repay its debts. That, in turn, could force the state to pay higher interest rates to borrow money, and cost taxpayers tens of millions at a time when the state is facing one of the worst budget crises in its history.

So who are the people who’ve promised to pay up if California, or other states, cities and municipal entities, default? There’s no way to know, because the swaps are still unregulated — though Congress is debating if and how to change that.

For the record, it doesn’t look as if many people followed Goldman’s advice, which the company said it stopped giving around October. Fewer than 200 contracts for swaps on California bonds are out, with a net value of just under $760 million, according to the Depository Trust and Clearing Corp. For Florida, there are 133 and for New York, there are 95.

Those figures are dwarfed by the numbers of swaps on companies, such as Southwest Airlines, which has over 4,600 contracts covering nearly $2.5 billion of underlying debt.

Even that is considerably fewer than the contracts on another company: Goldman Sachs. There are over 6,500 contracts on Goldman, covering $5.3 billion of debt.