This story was co-published with NJ Advance Media.

The FBI is investigating the organ transplant program at Newark Beth Israel Medical Center, according to people contacted by the bureau.

The bureau is looking into whether the program, which kept a vegetative patient on life support for the sake of boosting its survival rate, attempted to defraud federal insurers Medicare and Medicaid, said one person familiar with the situation, who spoke on the condition of anonymity. FBI spokeswoman Patty Hartman said that the agency could neither confirm nor deny the existence of an investigation.

Andrea Young, the sister of the Newark Beth Israel patient at the center of the case, said that the bureau is seeking to interview her. ProPublica reported in October that Newark Beth Israel’s transplant director, Dr. Mark Zucker, instructed his staff to keep Darryl Young alive, and not to discuss options such as hospice care with his family, until the one-year anniversary of his surgery. Federal regulators relied on the one-year survival rate to evaluate — and sometimes penalize — transplant programs.

Young, who is covered by Medicare and Medicaid, suffered brain damage during heart transplant surgery in September 2018 and never woke up. He remains hospitalized at Newark Beth Israel. The bureau launched its investigation within days after the article was published.

Besides the FBI, the New Jersey State Board of Medical Examiners has also started an investigation. The board, which oversees physician licensing, declined to comment on which doctors it is looking at. Andrea Young said that a board investigator interviewed her. Also investigating are the U.S. Centers for Medicare and Medicaid Services and the New Jersey Department of Health.

Linda Kamateh, a spokeswoman for the hospital, did not respond to questions about the FBI or state board probes. “Newark Beth Israel Medical Center is fully cooperating with all regulatory agencies and investigative bodies,” she said in an email. The hospital “bills the Centers for Medicare and Medicaid Services in accordance with approved billing guidelines,” she added. Newark Beth Israel has hired a private law firm and a consultant to conduct an internal review of its transplant program, and it has placed Zucker on leave.

The hospital typically only bills insurers when the patient is released. Young was discharged twice and moved to long-term care facilities, but he returned to the hospital in early 2019 after developing infections. Even if Newark Beth Israel hasn’t yet billed the government insurance programs for Young’s care, the FBI could be considering a number of potential criminal charges related to defrauding Medicare and Medicaid, said Michael Elliott, a defense lawyer in Dallas who was previously the lead attorney for the federal government’s Medicare Fraud Strike Force in North Texas.

ProPublica reported that the transplant team appeared to tailor medical decisions for at least three other patients because of concerns about its survival rate. The FBI is likely looking for other instances similar to the Young scenario in which federal insurance was already billed, Elliott said, adding that the investigation could take months or even years.

“If medical records were being falsified to keep him on a service, each false statement is a criminal charge,” Elliott said. Audio recordings published by ProPublica, in which doctors discussed the need to keep Young alive for the sake of survival statistics, could be evidence of “some kind of conspiracy to commit health care fraud, because they would be charging Medicare for his care, and there appears to be some agreement among the people who are taped,” he said. 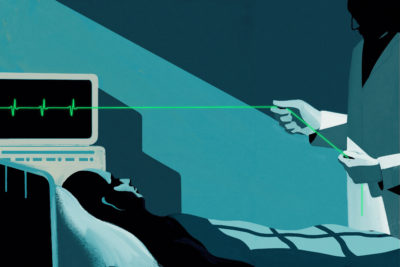 Darryl Young suffered brain damage during a heart transplant at Newark Beth Israel and never woke up. But, hardly consulting his family, doctors kept him alive for a year to avoid federal scrutiny.

ProPublica’s investigation found that Newark Beth Israel’s transplant team was worried about the possibility of being disciplined by CMS, after six out of 38 patients who received heart transplants in 2018 died before their one-year anniversary. That translated into an 84.2% one-year survival rate, considerably worse than the 91.5% national probability of surviving a year for heart transplant patients, according to the Scientific Registry of Transplant Recipients, which tracks and analyzes outcomes for the government.

The transplant program has touted a higher success rate. In a July 29 letter to New Jersey cardiologists, Zucker and Dr. Margarita Camacho, a heart surgeon, wrote, “Outcomes remain excellent at 98% survival rate for the past 48 transplants.”

In an email, Kamateh said the rate was based on transplants from May 2018 to May 2019. She did not respond to questions about how the 98% rate was calculated and how long patients had to live after their operation to qualify as survivors. The rate does not match up with any official statistics.