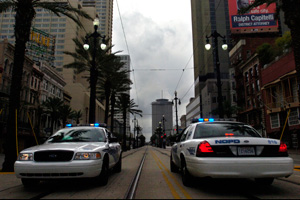 For anybody who has followed our reporting on the violence that followed Hurricane Katrina, the New Orleans Times-Picayune has an interesting story today.

According to the paper, FBI agents this week raided the New Orleans Police Department’s homicide unit, seizing files and computer drives connected to the so-called Danziger Bridge incident of September 4, 2005. The bureau is investigating the episode, during which NOPD officers loosed a fusillade of bullets on a group of civilians as they walked over the bridge, killing Ronald Madison and James Brissette, and wounding four others.

The police officers involved say they began shooting in response to gunfire from the civilians; that claim is vigorously disputed by the shooting victims.

The FBI raid focused on two NOPD officers tasked with carrying out the police department’s internal probe of the shooting. One of those detectives, Sergeant Gerard Dugue, has also been investigating the murder of Henry Glover.

As we’ve reported, Glover died after he was denied medical attention by a group of NOPD officers, according to witnesses. Federal agents are also scrutinizing his death — including the possibility that he was shot by police — and in recent months, federal prosecutors have called officers before a grand jury.

Correction, Aug. 7, 2009: This post originally stated that five people were wounded during the Danziger Bridge incident. In fact, it was four people.