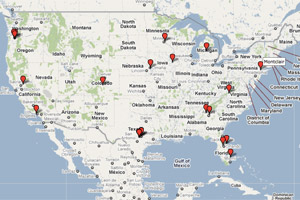 A few weeks ago we wrote about a faux "Census" survey being sent out by the Republican National Committee. We asked you to tell us if you've gotten similar mail. We've gotten about 40 responses pointing us to other examples of questionable invocations of the census and other official-sounding surveys that are actually fundraising requests.

One, called the "Official Ask America Datascan Survey," was sent out by the National Republican Senatorial Committee, and makes the questions on the faux "Census" form look tame. (One question from the survey: "Barack Obama and Nancy Pelosi want to confiscate legal fire arms from law abiding American citizens. Do oppose [sic] this liberal effort to restrict your Right to Bear Arms?")

In another instance, a supporter of local Democratic candidates in Connecticut tacked contact information onto brochures about jobs with the Census and mailed them out. And the FBI office in Kansas City issued a public warning over a "Census of Senior Citizens" that was really a fundraiser. Other readers shared their discontent with more innocuous surveys, like this one from Florida.

But any survey that asks for money draws the ire of the American Association of Public Opinion Research, says Peter Miller, the association's president and associate professor at Northwestern University.

"The Republican Census example is just a way-far-out-there example of a much broader problem," he said. "If you go back until about the time our organization was formed in the late 1940s, one of the major issues they mentioned at the first convention" was fake surveys that are really meant to raise money.

Miller says fake or misleading surveys contribute to an overall distrust in public opinion research, which has fueled a decline in response rates.

Miller added that the RNC's "Census" was one of the most egregious examples of this problem he's seen during his 30-year career. "It is such a blatant miscommunication, or misrepresentation," he said. "The fact that it attaches itself to the Census, it's really more pernicious than other efforts that I've seen." Late last month, Miller sent a letter to Michael Steele, the RNC chairman, asking him to end the mailers. He hasn't heard back.