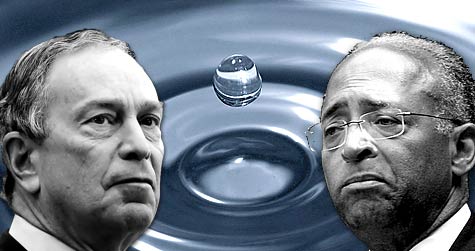 A version of this story appeared in the Albany Times-Union on Oct. 8, 2009.

A preliminary report from a consultant hired by New York City warns that "nearly every activity" associated with natural gas drilling could potentially harm the city’s drinking water supply and that while the risk can be reduced with strict regulations, "the likelihood of water quality impairment … cannot be eliminated."

That assessment contrasts sharply with the picture presented by an environmental review released by state officials last week. Aside from clauses that ban some waste pits and promise additional consideration for drilling within 1,000 feet of the city’s reservoirs and water infrastructure in upstate New York, the environmental review does little to respond to New York City’s long-standing concerns that the watershed deserves special environmental consideration and instead paves the way for drilling to proceed throughout the watershed.

The issue appears to be emerging as a point of controversy in New York City’s mayoral election.

City comptroller and mayoral candidate William Thompson criticized the state’s environmental review in a news release and said Mayor Michael Bloomberg should be more outspoken. "I am also concerned that the City and the Water Board have been extremely lax in responding to this threat," he said.

Marc LaVorgna, a spokesman for Bloomberg’s office, said the mayor will withhold judgment until he sees the final version of the report the city commissioned from Hazen and Sawyer, a New York City-based environmental engineering firm. The full report isn’t expected to be delivered until December, after the public comment period for the state environmental review has ended.

LaVorgna emphasized that the Bloomberg administration has invested heavily in the city’s water system and would not rule out a protracted fight to protect it.

"This is not a fringe issue for this administration," LaVorgna said. "This is a mayor that adamantly orders tap water every night he dines out."

In one of his few statements on the subject, Bloomberg, who has generally supported the idea of energy development, told WNYC radio Thursday that "if this has the danger of polluting, we will fight it."

"The stakes are very high based on the conclusions of this report," Manhattan Borough President Scott Stringer said in an interview with ProPublica. The report, he said, "suggests that city elected officials have a role to play here and a responsibility to step up and say, ‘What does frack drilling mean to New York City residents?’"

Last week Stringer announced he was launching a Kill the Drill campaign.

New York is one of four major cities in the United States with a special permit from the U.S. Environmental Protection Agency allowing its drinking water to go unfiltered. That pristine water comes from a network of upstate reservoirs and rivers spread across 1,600 square miles in five upstate counties. Those reservoirs – which all lie west of the Hudson River – supply 90 percent of the drinking water for 9 million downstate residents, nearly half the state’s population. If the EPA were to rescind the city’s special permit, New York City would have to build a treatment facility that could cost between $10 billion and $30 billion, according to various estimates.

Hazen and Sawyer’s early findings were summarized at a city meeting last week and posted on the city Department of Environmental Protection’s Web site Tuesday evening, after repeated requests for the document by ProPublica over the past several days.

The report, and an accompanying summary PowerPoint presentation, lay out several areas of concern. The consultants found that drilling "introduces hazardous chemicals into the watershed" and that "the well bore, which acts as a conduit between geologic formations, can allow previously isolated contaminants to flow into shallow groundwater or surface water."

The research also warned of "enormous volumes" of wastewater and said there are no treatment plants in the region designed to treat these wastes. It said the disturbance from hydraulic fracturing could cause seismic shifts or otherwise damage the tunnels or aqueducts that bring the water to the city. Hydraulic fracturing shoots millions of gallons of water, sand and chemicals underground with such force that it breaks rock and releases pockets of gas.

So far, New York City’s top officials have preferred a behind-the-scenes approach as the public debate over the state’s natural gas drilling policy unfurls in Albany. City DEP officials have protested to the state Department of Environmental Conservation in private letters, but have said little publicly.

In a letter obtained by ProPublica in July 2008, then New York City DEP commissioner Emily Lloyd asked the DEC commissioner to disclose the chemicals used in hydraulic fracturing and to consider a partial ban on drilling near the reservoirs that supply New York City’s water. Shortly afterward, and following an investigation by ProPublica, Gov. David Paterson ordered the environmental review that was released Sept. 30. Called the Draft Supplemental Generic Environmental Impact Statement, it supplements gas and oil drilling rules established in 1992. New York City officials have since sent several additional letters to the state DEC voicing their ongoing concerns.

A spokesman for the state DEC did not return repeated calls for comment.

The state supplemental draft report discloses many of the drilling chemicals, as Lloyd had requested, and it also strengthens several other environmental protections. But it did not recommend a full or partial ban on drilling in the watershed.

The supplementary impact statement is now subject to a 60-day public comment period, after which final guidelines will be issued. But Stringer and others are pressing the state for a 30-day extension, which would allow the findings from the Hazen and Sawyer report to be included.