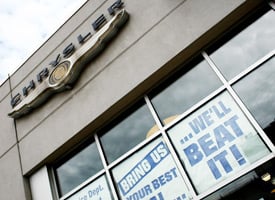 It is surprisingly difficult to get a handle on the growing Chrysler bailout. Little more than a week ago, the toll stood at a simple, round $4 billion. Since then, the bailout has grown three-fold. By our count it currently stands at $12.5 billion, which accounts for all the aid the Treasury has pledged to Chrysler before ($4.5 billion), during ($3.3 billion), and after bankruptcy ($4.7 billion).

We're likely to repeat this exercise next month when the much larger GM goes through a similar process. So the question is: How much of the bailout money for Chrysler will ever come back to the taxpayer?

The reality is that much of the money loaned to Chrylser before and during its bankruptcy process won't be recovered, said an administration official, speaking for the Auto Task Force, which is a joint effort of the White House and Treasury. (We tried to get the official to speak for attribution, but the official declined.) The face value of the $4 billion loan approved by the Bush administration will be by and large written off during the bankruptcy process, according to the official and Chrysler's bankruptcy filings. The administration has also pledged to give Chrysler up to $3 billion to keep the company afloat during restructuring.

So that's about $7 billion gone right there. The administration will do what it can to recover a portion of that money, said the official. A "loss-sharing agreement" between Chrylser and the administration will mean "some" of the $4 billion will be recovered. And the Treasury will get an eight percent stake in the Fiat-Chrysler alliance when it emerges from bankruptcy, along with warrants in the company, in exchange for the aid.

As for the rest, it's a little murky. The administration agreed to provide Chrysler with $500 million in late April before the company claimed bankruptcy protection. But now that Chrysler's in bankruptcy, it won't be using that, the official said. The Treasury has also provided about $280 million to guarantee Chrysler's warranties while it's in bankruptcy, and it's unclear how much of that will be used. And as for that $4.7 billion loan that Chrysler will get when it emerges from bankruptcy court (within one to two months, the administration says), it's too early to tell.

Oh, and don't forget the $1.5 billion that's gone out to Chrysler Financial, a separate company that finances Chrysler sales. President Obama was blunt about the company's prospects last week, saying that it would "require an unacceptably large stream of taxpayer money to remain viable." Presumably, then, what remains is not viable. That $1.5 billion has already been used to extend loans to car buyers.

A Chrysler Financial spokeswoman said that the company remained committed to the terms of its agreement with the Treasury. The administration official said that Treasury expected to collect on its loan as those loans to car buyers are repaid.