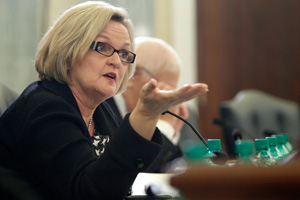 Today at 2:30 p.m., Sen. Claire McCaskill, D-Mo., was supposed to hold a hearing on the U.S. effort to train Afghanistan's police force. This is no small thing. Not only has the Obama administration made training Afghan cops a key foreign policy goal for getting American soldiers out of the country, but the U.S. has already spent $6 billion on the training.

And as detailed in a joint story by ProPublica and Newsweek on the cover of this week's magazine, the mission has been a disaster. Afghan cops have been accused of corruption, rape and arms sales to the Taliban. State and Defense department officials have continually squabbled over how best to train them. The chief contractor doing the training, DynCorp International, has been embroiled in a contract protest that has delayed attempts to fix the flailing system.

All of which, you'd think, would make Congress want to ask: What's up? Instead, McCaskill's Oversight Committee hearing was suddenly canceled just hours before it was to start. McCaskill took to the floor of the Senate to accuse Republicans of killing the meeting. Senate rules forbid most types of hearings when the Senate has been in session a certain number of hours or after 2 p.m., but those rules are traditionally waived by consensus of both parties. Not anymore, McCaskill said, accusing the Republicans of a "new low of obstructionism."

"Why in the world are we not able to ask questions at a hearing in a few minutes as to why the police training is not going well in Afghanistan and how we can do better. Our men and women are over there and they are at risk if we don't get this right," McCaskill said.

"I had to call these witnesses and say, 'Go home because the Republicans won't let us have a hearing?' Somebody's got to explain this to me," she said.

Correction, March 24, 2010: This post originally identified Sen. Mitch McConnell as the Senate majority leader. He is, in fact, the Senate Republican leader.