Until late morning on Friday, the White House homepage had an “issues” link to a page on the environment touting former President Obama’s efforts to build a “clean-energy economy” and tackle climate change.

It’s still viewable via archive.org, but almost as soon as President Donald J. Trump’s hand was off the Bible, White House websites flipped to content consistent with Trump’s campaign pledges to roll back such programs.

The live White House homepage now reflects President Donald J. Trump’s agenda, including a link to his energy plan, which includes “eliminating harmful and unnecessary policies such as the Climate Action Plan” of his predecessor.

At ProPublica, we’ll be trying to keep track of subsequent changes on federal websites as the Trump administration settles in. On Twitter or elsewhere, use the hashtag #trumpeffect and of course contact me via @revkin on Twitter, on Facebook, or by email at [email protected].

Other groups have set up similar initiatives to help monitor all the remaking, including a #TrumpWatch project at the Natural Resources Defense Council.

Much of what has unfolded online since the inauguration ceremony is pro forma. Administrations come and go, and so do their agendas.

But there could be instances when significant issues arise, even legal questions, should Trump’s team move aggressively to erase government informational output on greenhouse-driven climate change. For example, NASA’s charter from Congress in the Space Act of 1958 was to “provide for the widest practicable and appropriate dissemination of information concerning its activities and the results thereof.” A systematic attempt to stifle the agency’s findings might be argued to constitute a violation of the law. 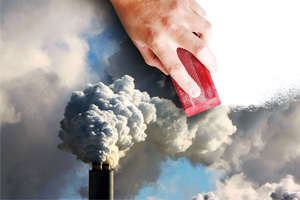 During the George W. Bush administration, whistleblowers helped expose actions by political appointees seeking to limit or tone down government reports, news releases or other information on climate change.

In 2004, after some early efforts came to light, the president’s science adviser, Dr. John H. Marburger III (a Democrat) made no bones about a president’s prerogative in an interview for one of my articles for the New York Times:

“This administration really does not like regulation and it believes in market processes in general,” he told me. “So there’s always going to be a tilt in an administration like this one to a certain set of actions that you take to achieve some policy objective.”

Keep that notion in mind in the months ahead.

So far, the scrubbing and reinstallation of information has not yet spread to climate websites at NASA, the National Oceanic and Atmospheric Administration, the Environmental Protection Agency and other departments and agencies working on climate or clean-energy policy.

But there’ve been early warnings, including an Inside EPA story on Jan. 17 quoting an unnamed Trump transition official: “Obama’s 2013 memo ordering EPA to establish its power sector carbon pollution standards ‘will not survive the first day.’”

We’re looking forward to your help ahead.