Last month, I became an American citizen, a tremendous honor and no easy accomplishment, even for a Canadian. After living here for 12 years, I thought I knew everything. Then I learned how we mint Americans.

After years of steep filing fees and paperwork (including one letter from Homeland Security claiming that my fingerprints had "expired"), it all came down to a test. I passed, and, my fellow Americans, you could, too -- if you don't mind providing answers that you know are wrong.

Take Question 36. It asks applicants to name two members of the president's Cabinet. Among the correct answers is "Vice President." The vice president is a cabinet-level officer but he's not a Cabinet member. Cabinet members are unelected heads of executive departments, such as the Defense Department, or the State Department.

The official naturalization test booklet even hints as much: "The president may appoint other government officials to the cabinet but no elected official may serve on the cabinet while in office." Note to Homeland Security: The vice president is elected.

Still, a wonderful press officer in the New York immigration office noted that the White House's own website lists the vice president as a member of the Cabinet. It's still wrong, I explained. I told her that my partner wrote an entire book about the vice president and won a Pulitzer Prize for the stories. I was pretty sure about this one. A parade of constitutional scholars backed me up.

I showed it to lawyers and law professors. They were stumped.

Judge Richard Posner, the constitutional scholar who serves on the U.S. Court of Appeals in Chicago, was unhappy. "These are all incorrect," he wrote me. "The rule of law means that judges decide cases 'without respect of persons,' that is, without considering the social status, attractiveness, etc. of the parties or their lawyers."

So, where do these questions come from? 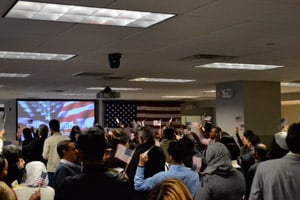 U.S. Citizenship and Immigration Services, a department within Homeland Security, spent six years consulting scholars, educators, and historians before the current test was introduced in 2008. The result: 100 questions and answers designed to provide an in-depth treatment of U.S. history and government.

"The goal of the naturalization test is to ensure America's newest citizens have mastered a basic knowledge of U.S. history and have a solid foundation to continue to expand their understanding as they embark on life as U.S. citizens," said Christopher Bentley, a spokesman for USCIS.

During the citizenship interview, applicants are asked a randomly selected 10 questions from the test and must answer six correctly. In addition to the questions, there is a reading and writing test for English proficiency.

My immigration lawyer accompanied me to my interview. In the security line, I told her I was bothered by Question 16: Who makes the federal laws?

Each of the three possible answers, it seemed, was incomplete. The official answers were: "Congress"; "Senate and House (of representatives)"; "(U.S. or national) legislature." I'm not a lawyer but even Canadians watched Schoolhouse Rock. Where, I wondered, was the president, whose signature is what makes a bill into a law?

My lawyer sighed, she agreed. But: "If you get asked that question, just give the official answer," she said. I didn't get that question.

I also wasn't asked Question 1: "What is the supreme law of the land?"

The official answer: "the Constitution." A friend and legal scholar was aghast. That answer, he said, is "no more than one-third correct." He's right.

Many of the test questions, organized under topics such as "system of government," "geography," and "American history" are correct and informative. Since I'm a reporter, one tugged at my heart.

Question 55 asks: What are two ways that Americans can participate in their democracy? Among the correct answers: "write to a newspaper."

At my interview, I was asked questions on presidential succession, the Cabinet, Senate terms, and the Supreme Court. I was asked to name a branch of government. (I went with the executive.)

I was asked Question 8: What did the Declaration of Independence do?

Heeding my lawyer's advice, I went with the official answer: "declared our independence."

I answered six consecutive questions correctly and moved on to the language section of the exam. Native English speakers are not exempt from this section and I was asked to read aloud the following sentence: "Columbus Day is in October."

I was then asked to write a sentence in English. Remarkably, it was the same sentence: "Columbus Day is in October."

Next, I reaffirmed answers I had given on my citizenship application.

Was I a member of the Communist Party? Was I member of a totalitarian party? Am I a terrorist? Although I was born in 1970, I was asked: Between March 23, 1933 and May 8, 1945, did I work for or associate in any way with the Nazi government of Germany? Had I worked at a concentration camp?

The officer who interviewed me, Sandy Saint Louis, had to ask me the questions. But she didn't even look up or wait for my responses. She checked off "No" after each one.

She did pay attention when she asked whether I was a habitual drunkard, a polygamist, a drug-smuggler, a felon, a tax-evader.

My paperwork was in order, my background check was complete. When the interview was over, Saint Louis pressed a large wooden seal into a red ink pad and stamped "approved" across my application. A wave of relief washed over me and my lawyer shot me a sweet smile. Ten days later, when I returned for the swearing-in, a brief and final questionnaire asked if I had engaged in prostitution since the interview. I checked "No."

On Friday, Jan. 28, accompanied by my family, I was among 160 citizens-in-waiting who filed into a 3rd floor auditorium in lower Manhattan to be sworn in as Americans. On our seats were an American flag, a copy of the Constitution, a booklet featuring the stories of prominent naturalized Americans, and a welcome letter from President Obama.

Reading the letter, I began to cry. I had spent more than one-quarter of my life hoping to become American, and I was suddenly overwhelmed by the honor and the significance of the moment. The place I have called home for 12 years was finally claiming me as well.

I looked around the room and saw other fortunate souls with long journeys now behind them, quietly weeping with joy.

An immigration official asked us all to stand, and to remain standing, when the name of our country of origin was called out. After he read through the names of 44 countries, we were all standing, waving our flags.

Together, we took the Oath of Allegiance and were then seated as citizens of one nation.

Everyone in the room that day had scored a perfect 100 percent on the test and, for fun, an official decided to test us all once more. Who wrote "The Star Spangled Banner"? he asked. Only a few called out "Francis Scott Key," perhaps because that question is no longer on the test. It was prominently removed four years ago. 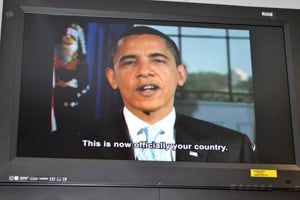 A newly sworn-in citizen led us in the Pledge of Allegiance. We sang the national anthem and then watched a video message from the president shown at every swearing-in ceremony across the country.

"It's an honor and a privilege to call you a fellow citizen of the United States of America," Obama told us. "This is now officially your country."

There were more tears. At the end of the hour, we received certificates of naturalization and were given instructions on how to obtain U.S. passports.

My family and I left soon afterward. It was 10:30 a.m. and cold outside. We took the subway uptown. Three children got off at three different stops, headed to their schools or the library. We took the youngest up to his school. He walked in clutching his American flag and announced proudly to his teachers that "Mommy is American."

At a party that evening, I displayed the letter from Obama and laid out the flashcards. Over Sam Adams beer and mini-burgers, I spoke about the ceremony and test. The host led us all in the Pledge of Allegiance, my second of the day. Looking around the room, I realized that a significant number of my friends are journalists, writers, academics, and lawyers. It's a nitpicky crowd and during three hours of celebration they noticed additional errors in the questions.

At the end of the night, one of the catering staff gathered up the flash cards and as she held them out to me, she revealed that next month she too will take her citizenship test. I was thrilled. I closed my first day as an American citizen by handing them over to her. "Which ones did you say were wrong again?" she asked. "Just give the official answer," I said, "and you'll do fine."