This week, the U.S. Department of Health and Human Services is expected to announce the long-awaited enrollment numbers for the first month of the health insurance marketplaces. And from all reports, they’re going to be low.

The Wall Street Journal reported yesterday that the 36 states that rely on Healthcare.gov for their insurance marketplaces signed up fewer than 50,000 people in their first month of operation.

“Another way to look at the Healthcare.gov enrollments is that 50,000 enrollments over 36 states over 31 days is less than 50 enrollments per day per state,” health-care consultant Robert Laszewski wrote in an email to reporters.

The Washington Post reported this morning that the number is actually around 40,000. 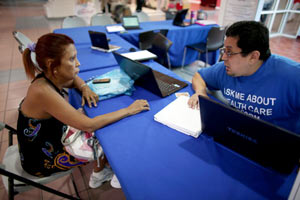 That appears to be far lower than the administration’s early estimate that 500,000 people would sign up for coverage in October, the first month the marketplaces were open.

Other recent stories offer variations on that theme. Oregon has not signed up any people in its exchange. Delaware has only four. And Washington, D.C., has five. There are surely more applications in the pipeline, but these early numbers are anemic.

So how big a failure is this?

To those convinced the law will fail, it’s a disaster. The glitches that have plagued Healthcare.gov have not been solved, and the clock is ticking toward Dec. 15, the last day that consumers can sign up for insurance plans that begin on Jan. 1.

If the problems continue and only the most motivated – i.e., the sickest and oldest – sign up for coverage, insurers will be hit with big losses and will have to dramatically increase rates for 2015, the beginning of a death spiral, the critics reason.

To those convinced the law ultimately will succeed, the number means little. The problems with the website have masked demand. And the experience of Massachusetts and Medicare’s Part D prescription drug benefit demonstrate that the vast majority of people sign up closer to the deadline. In this case, the final deadline is March 31, the day the 2014 open enrollment season closes.

Four things to look out for when the numbers are announced:

Consider those being dropped by their insurers, not just those signing up.

The Congressional Budget Office has set the bar in terms of predictions — estimating that 7 million people will sign up for coverage on the exchanges in 2014 (6 million with subsidies; 1 million without). But the CBO also seems to estimate that the number of people in the “nongroup” market, which includes individual policies, will decrease by a net of 2 million next year. It’s clear now that many more people than that are being dropped by their insurance companies, which are citing provisions of the Affordable Care Act.

The administration has changed its definition of enrollees.

According to Sarah Kliff at the Washington Post, the administration’s figures will include not only those who have paid their first month’s premium payment but also those who selected a plan on the exchange, but who haven’t yet paid. It’s unclear how many in the second group ultimately will pay up. One would assume officials would have to drop them from the count if they don’t.

The age mix of enrollees matters almost as much as the total number.

The new insurance system relies on young, healthy consumers to help share the risk with older, sicker ones. That will help keep costs in check. If that doesn’t happen and the group skews older and sicker, it may mean that the premiums won’t be enough to cover medical costs. Annie Lowrey wrote in the New York Times: “Getting ‘young invincibles,’ as insurers sometimes call them, to sign up for insurance is an uphill climb. Even with the public campaigns, only about one in four 19- to 29-year-olds is even aware of the exchanges where they might buy affordable insurance, and the ignorance is especially acute among the uninsured, according to a survey this year by the Commonwealth Fund, a nonprofit research group.”

Some state exchanges have had much more success than Healthcare.gov.

Kentucky has received praise across the country for doing what the federal government has been unable to: Create a functioning website. As of Nov. 8, more than 33,000 had enrolled in Medicaid and 7,000 had enrolled in a qualified health plan, according to kynect, the state’s marketplace. Jeffrey Young at the Huffington Post writes, “Obamacare's fate in these states is just as uncertain as at the federal level, yet success there is crucial if the law is to take hold and thrive. Grass-roots, state-run success stories could inspire others to do more to help the law in the future, while failures could further undermine support for the entire endeavor.”