A year ago, the Anchorage Daily News and ProPublica embarked on an extended reporting project investigating Alaska’s extremely high rates of sexual violence and why the problem doesn’t get better.

We launched a deep look at criminal justice across the state and documented, for the first time, how one in three Alaska communities had no local law enforcement of any kind. We reported how in some communities, convicted criminals — including sex offenders — have been hired as police officers.

We reported how the Village Public Safety Officer Program, created 40 years ago to protect the most hard-to-reach communities, is on the brink of collapse. We found big gaps in oversight that left people in many Alaska communities, including children, deeply vulnerable.

You can read all the coverage so far here.

This year, U.S. Attorney General William P. Barr declared the lack of law enforcement in Alaska villages to be a federal emergency. Federal, state, local and tribal entities have begun taking steps to address the problems.

It’s hardly just a rural Alaska problem. While our reporting has largely focused on systemic issues in rural Alaska, rates of sexual violence are high in urban areas as well. This week, we announced that the Daily News and ProPublica will continue the project for a second year as part of ProPublica’s Local Reporting Network. While the first year focused heavily on policing in rural areas, we anticipate the second year to shift to a deeper look at failure points in the system more broadly.

But we don’t just want to look at the problems. We’re committed to laying out possible solutions. We’ve asked political and community leaders, Alaskans working in law enforcement and people with experience in the field for their ideas. And today we’re publishing a story by reporter Kyle Hopkins that outlines what some experts say are concrete steps that could be taken to better ensure that Alaskans are protected and have access to justice, whether they live in the state’s biggest cities or far-flung villages.

We also invited a cross section of leaders from around the state to share their ideas directly. Today, we’re publishing the first group of them. They include:

All of these pieces can be found here. We will be adding more pieces in the coming days. 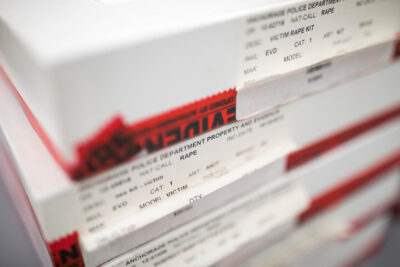 By failing to collect samples when they arrest people, Alaskan law enforcement left the state’s DNA database with crucial gaps, allowing at least one serial rapist to go undetected.

This is just the start. It’s a conversation, and we want to hear from you. We want your feedback on what we’ve done so far and where you think we should go next. Hundreds of survivors of sexual violence in Alaska have answered our questionnaire, and we’ll be incorporating their input, concerns and insights into future coverage. The problems have persisted too long. We think this project can make things better, and we thank you for reading, for your ideas and sharing your stories.

David Hulen is editor of the Anchorage Daily News and adn.com.