Life in Kotzebue came to a standstill last fall when a 10-year-old girl vanished from a playground in the center of this northwest arctic town. After searchers found her body hidden in the tundra, police charged a local man with kidnapping, sexual abuse and murder.

As one of the reporters covering the case, I tried to learn as much as possible about the 42-year-old suspect. He was a lifelong Alaskan and was not a registered sex offender. Yet two family members soon told me he had raped them decades earlier when they were girls, beginning a pattern of abuse. (He has pleaded not guilty to charges stemming from the Kotzebue homicide and has not responded to his relatives’ claims.)

Around the same time, a police dispatcher in Nome said her colleagues ignored her when she attempted to report that she had been raped on camera, prompting demotions and upheaval within that seaside police department. Inspired by the dispatcher’s willingness to share her tale, a young woman from the nearby village of St. Michael said she too had been raped in Nome and that no one faced charges. As one article led to the next, more and more survivors of sexual assault in Alaska agreed to tell their stories.

Here is what hit me the hardest about the interviews: Each person had more than one story to tell. I might ask someone about a specific sexual assault that occurred in the past few years, only to learn she also had been victimized as a child, and again as a teen and as an adult. Sometimes the crimes were reported to police, sometimes not. Sometimes the victims were adults, sometimes children. Mostly women, but sometimes men.

I can’t recall one instance, from those interviews in the fall, in which a survivor said someone was ever held accountable.

At the Anchorage Daily News, whenever we’d talked about the most pressing issues the newsroom ought to cover, sexual violence and the sexual abuse of children loomed in the background. Alaska’s sexual assault rate is three times the national average.

Sometimes the issue felt too big for a news organization with limited resources. We worried about missing the big picture. About promoting stereotypes or failing to present the context of historical trauma that must be considered when talking about modern problems in Alaska.

Often, we found people in villages and cities alike were simply unable or unwilling to talk about this subject with the same openness that they might discuss alcohol abuse or even suicide. Until recently.

Something has changed in the way Alaskans talk about sexual assault.

We asked survivors to help us learn more about breakdowns in the Alaska criminal justice system. More than 200 people from across Alaska confidentially shared their experiences, many describing a system that assumes the survivor had been drinking before a sexual assault, or prosecutors who were uninterested in cases in which the victim was inebriated, or detectives who said the case couldn’t move forward unless the victim called her rapist to obtain a recorded confession. Survivors, attacked in remote villages, said they were told not to shower, to climb on a plane and fly hundreds of miles to be interviewed and undergo a physical examination because rural clinics are not equipped to conduct a rape investigation.

About three-fourths of the people who responded said they would be willing to talk to a reporter on the record about their experiences with sexual violence in Alaska. They wanted to inspire others, to provoke permanent change.

At that point, our small newsroom asked for help. We were selected to join ProPublica’s Local Reporting Network, and collectively we reached out to every city, town and village, every tribal council and corporation and every police department in Alaska. We obtained thousands of records from the court system. We asked police chiefs for information on every sex crime reported in their jurisdictions over multiple years.

Today, we report how one in three Alaska communities have no local police protection of any kind.

This is more than a professional pursuit. It is personal for me.

I was born and (mostly) raised in Alaska. I spent afternoons on cold beaches, overturning rocks in search of eels. Later, as a high schooler staring out the window of a float plane or sleeping on ferry boats en route to basketball tournaments, I remember thinking I was lucky to see and do these things.

The roots of this series date back to when I started working as a reporter here in the mid-2000s. At the time, Alaska Native villages were fighting for equal police protection from the state, arguing that if Alaska would not recognize the crimefighting powers of tribal courts, then villages should be safeguarded by publicly funded, armed and certified law enforcement — the same as in mostly white cities.

The villages lost the lawsuit, not because the Alaska Supreme Court decided we do not have a two-tiered justice system, but because that inequity was not purposefully racist.

To tell this story right, we need your help. If you are an Alaskan with a story to share about sexual assault or our legal system, please consider taking part in our confidential survey. If you have a tip or want to talk privately with a reporter, email me at [email protected] or call me directly at 907-257-4421.

As Alaskans, we live in a magical place. Bountiful and beautiful and filled with resilient people. I’m grateful to have grown up here and to raise my daughters here. But for many, it is not safe. Let’s try and understand why, and how to change it. 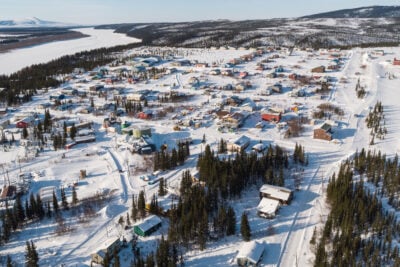