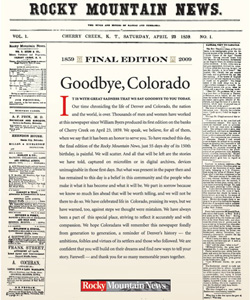 Colorado’s oldest newspaper published its last edition today. So we're taking a bit of space to recognize some of the fine investigative work the Rocky Mountain News has done over the years.

A July 2008 investigation by the newspaper found that although tens of thousands of nuclear arms workers applied for government compensation after being exposed to radiation or other toxins, most have never seen a dime.

A 2005 series explored how University of Colorado-Boulder ethnic studies professor Ward Churchill ignited a major controversy when he called the victims of the World Trade Center terrorist attack "Little Eichmanns." After calls for his firing, he was also accused of plagiarism and misrepresenting himself as having American Indian heritage.

In 2003, reporters investigated investment companies owned by Denver billionaire and Qwest founder Phil Anschutz that put money into numerous telecommunications companies that sought or did business with Qwest. Those companies often saw their stock shoot up after initial public offerings on the news that they might get contracts with Qwest, which was known as the "kingmaker" of telecom companies.

Hundreds of investigations by Rocky reporters over the years have shown corruption, misspending of public funds and systems that were not working the way they should have been.

Today the newspaper published what some are calling its own obituary. It would have celebrated its 150th birthday on April 23.