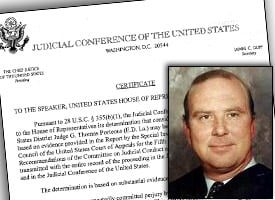 The House Judiciary Committee voted unanimously today for a task force to investigate whether to impeach Judge Thomas Porteous, who served in federal district court in New Orleans since 1994.

As our post Tuesday reported, Porteous is at the center of judicial and U.S. Department of Justice investigations alleging that he took cash, hunting trips and steak dinners from five attorneys and two companies that had 25 cases before him.

If the task force investigation moves into next year, Porteous would be the first federal judge to face impeachment in 20 years.

Investigators from a special committee of the U.S. 5th Circuit Judicial Council said they counted $80,000 in unexplained deposits into Porteous' bank and money market accounts.

The documents also describe Porteous' bankruptcy case, which he initially filed under a false name and pursued even as he continued to rack up gambling debts. Porteous weighed in (PDF) on the allegations in December 2007, citing Hurricane Katrina, the loss of his wife and alcohol and gambling addictions as complicating factors in his life.

Jonathan Godfrey, spokesman for the Judiciary Committee, said the task force will be formed in coming days and will begin investigating, hold hearings and possibly subpoena witnesses.

Godfrey said the task force technically will expire Jan. 2, 2009, when the next session of Congress begins, but members will likely be re-appointed and move forward.

Eventually, the task force will send its recommendations to the full judiciary panel for a vote on whether to impeach. If so, Porteous would face a trial in the Senate to determine if he can remain in office.