Pamela Jeter of Atlanta, Ga., has been trying to get a mortgage modification for more than two years. She seems like an ideal candidate. She has shown she can stay current with a reduction in her monthly mortgage payments. Everybody would seem to win. Even the investors who ultimately own her loan think she should be able to get one. So, why is Jeter facing foreclosure?

A bank that she didn't even know is involved with her loan has thrown up a roadblock to modifications. At least tens of thousands of other homeowners have shared a similar plight. Jeter's case is a window into a broken system where even though the actual investors, when asked, say they want to allow modifications, the bank that acts as their representative has refused to allow them.

Two big banks act as middlemen between the homeowners like Jeter who make payments and the mortgage-backed securities investors who ultimately receive them. The banks' jobs were supposed to be relatively hands-off, devoted more than anything to processing homeowner payments. When the housing bubble burst, they faced new demands.

One of those middleman roles is well-known to homeowners: the mortgage servicer, responsible for collecting homeowner payments and evaluating requests for a modification.

But it's another middleman that's proven the real barrier for Jeter: the trustee, who is supposed to be the investors' representative, making sure the servicer is maximizing investors' returns and distributing checks to them. HSBC is the trustee for the pool of loans of which Jeter's is a part -- and it's refused to approve any modifications for loans like hers, saying the contracts around the mortgages simply don't allow it.

The good news for Jeter is that, in what seems an unprecedented step, her servicer OneWest has taken HSBC to court in order to allow modifications. It filed suit in June of last year.

But in a sign of just how convoluted the mortgage world has become, OneWest is also pushing to foreclose on her. A recent sale date was avoided only after her lawyer threatened to sue.

Update: One day after this story ran, OneWest postponed foreclosure, saying that it wouldn't attempt to seize Jeter's home again for at least two months.

Jeter's loan was typical of the boom years. In order to help pay for improvements on her home in 2007, she'd refinanced into an interest-only adjustable-rate loan. That loan was bundled with thousands of others by a Wall Street bank and sold off to investors (pension funds, hedge funds, banks etc.).

That's where the trouble started. In Jeter's loan pool and nine others, the contracts laying out the servicers' responsibilities and powers contradict each other. OneWest's lawsuit seeks to sort out that contradiction.

One document, a private contract between the servicer and the Wall Street bank that bundled the loans, explicitly forbids servicers from modifying loans in the pools in a way that would reduce homeowner payments. But other contracts -- that investors could see -- explicitly allow such modifications.

It's become a familiar problem during the foreclosure crisis, dealing with the aftermath of the banks' corner-cutting and sloppy paperwork of the housing boom.

No one appears to have tried to sort out this mess until 2009, when OneWest requested that HSBC, the trustee, allow modifications. The administration had just launched the Home Affordable Modification Program (HAMP), which pays servicers and investors subsidies to encourage affordable modifications. Under the program, modifications occur only when they will likely bring a better return to investors than foreclosure.

But HSBC refused to authorize any modifications, saying the contracts prohibit them. It's obligated to act in investors' interest, and it feared getting sued by those who didn't want to cut homeowners' payments. The dispute dragged on for months. Ultimately, HSBC offered to allow modifications only if OneWest accepted the risk of getting sued by investors, but OneWest wouldn't.

OneWest was in an increasingly difficult situation, it says in its suit. It faced potential suits from investors if it modified loans, and if it didn't, homeowners in the pool might sue.

In late June 2010, with HSBC still not budging, OneWest filed suit, asking a federal judge to decide whether modifications should or should not be allowed.

The case suggests that when investors themselves are asked, they will approve modifications. HSBC polled the investors in the 10 pools after the suit was filed. A large majority favored allowing modifications. Based on those results, HSBC said in a court filing in January that it did not oppose OneWest's request for a judge to intervene and that if the judge declared modifications were allowed, that would be fine with them.

In the meantime, 3,000 homeowners like Jeter whose mortgages are caught up in the dispute have been unable to get any reduction in payments. When OneWest filed its suit, it said at least 800 of the loans seemed eligible for an affordable government-sponsored modification but couldn't actually be modified because of HSBC's stance. Those homeowners "are facing the possibility of losing their homes through potentially avoidable foreclosures every day," it said.

It's not clear how many of those homeowners have since been foreclosed on. OneWest said in a statement that it had no choice in pursuing foreclosure: It's "contractually obligated to continue servicing loans in accordance with the terms of the underlying securitization documents."

The suit is remarkable not only because it seems unique -- close observers said they hadn't seen another example of a servicer going to court against a trustee -- but also because it lays bare a relationship that is usually a mystery to homeowners and investors in securitized mortgages.

It's often hard for homeowners to tell if a servicer is correctly citing an investor restriction when denying a modification. Servicers have cited investor restrictions when denying modifications for at least 30,000 homeowners, according to a ProPublica analysis of Treasury Department data. A Treasury spokeswoman said auditors examining such denials had found they were almost always legitimate. That's not an experience shared by homeowner advocates.

While there are clear cases where the contracts prohibit modifications, homeowner advocates say servicers often falsely claim their hands are tied, blaming "the investor" when there's really no restriction on modifying loans. In a number of cases, said Jeff Gentes, an attorney at the Connecticut Fair Housing Center, servicer employees have told his clients that there was an investor restriction, when a little bit of digging showed that's not true. We reported on this problem last year.

How a Trustee Can Block a Loan Modification 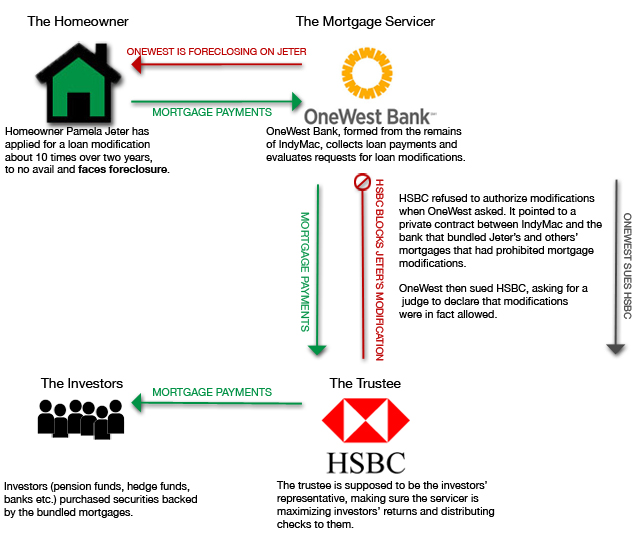 That's also an experience shared by OneWest homeowners. Briant Humphrey of southern California says OneWest told him repeatedly for months that an investor in his mortgage wouldn't allow a modification. But that doesn't appear to be true. OneWest declared in its suit against HSBC that, of the 500,000 or so mortgages it services, the only ones not eligible for possible modification were the loans at issue in the suit. Humphrey's loan is not one of them.

His case is notable for another reason: Humphrey happens to be friendly with one of the Treasury officials in charge of HAMP, Laurie Maggiano. After narrowly avoiding a foreclosure by declaring bankruptcy, Humphrey was able to speak with Maggiano, and he credits her with finally getting higher level attention at OneWest. His case is currently in review again.

Overall, investor restrictions have been a relatively minor problem compared to the many other barriers homeowners have faced in a quest for a modification. They represent about 2 percent of the 1.9 million total homeowners who've been denied. In most cases, the contracts written when the securities were sold give the servicer clear authority to provide modifications.

In the cases when there actually is a restriction in the documents, the servicer is supposed to at least try to get permission. The HAMP rules require the servicer to send a letter to the trustee requesting that modifications be allowed.

But even that small step has proven too much for many servicers. Last summer, a director at Deutsche Bank, one of the largest trustees, told ProPublica that such requests "never happen." Deutsche Bank did not respond when asked if that was still the case.

In cases where there's a clear contractual bar to modifications, the servicer and trustee could take the initiative to change the contracts by having the investors vote on it or, if voting isn't required, amend the contract themselves.

But in general, said Gentes, the housing attorney, servicers are slow to investigate and eliminate bars to modification. Servicers are paid a low, flat rate per loan and are motivated to keep costs down. "The costs of removing an investor restriction are often borne by the servicers, and so extensive amendment rules often mean that servicers won't pursue it."

Trustees, who get paid even lower fees, are no different, said Bill Frey of Greenwich Financial Services, which specializes in mortgage-backed securities. "They're very, very prone to inaction."

Both, as middlemen, don't bear the loss when a home is foreclosed on.

As for Jeter, eight months after OneWest filed suit to allow modifications, she is facing foreclosure for the fifth time.

Self-employed, she hit trouble in 2008 because of the recession. After failing in attempts to refinance into a conventional loan, she started talking to her servicer, then called IndyMac, about a modification. (OneWest was formed from the remains of the failed bank IndyMac. It has recently been under scrutiny from regulators for its foreclosure practices, along with other of the country's largest servicers. )

An employee told her she had to miss several payments in order to qualify for a modification -- a common experience for homeowners.

"I hadn't done anything like that before," she said. "It was a crazy thought." But because she'd been assured that was the only path to a modification, she did it.

Several months later, OneWest put her on a six-month temporary payment plan that cut her payments almost in half from $3,500 to $1,850.

She made those payments, but still there was no modification. "I regret to inform you that your particular loan is in a group of loans that the investor will not modify," a OneWest employee wrote her in an October 2009 email, telling her to either pay off her mounting late payments or face foreclosure.

The modification application process continued, however, and the reasons for denial proliferated. She was told at one point to get more income, so she took in tenants. She was asked over and over for the same paperwork -- as we've reported, a typical experience. In all, she says she's applied for a modification about 10 times.

"It's been pure hell," she said. "I've heard every excuse in the book."

Because of the mounting arrears and slumping housing market, she now owes more than her home is worth.

The effort has been a constant preoccupation for years now, and she's communicated with other frustrated OneWest homeowners across the country. Turning OneWest's fears of homeowner lawsuits into reality, she hired a lawyer who prepared a suit in case OneWest attempted to foreclose. In March, OneWest postponed seizing her home at the last minute. OneWest has offered another temporary payment plan, but Jeter is wary that it will end like the last one, with her payments simply lost. Currently, her home is set to be foreclosed next week.

In the meantime, HSBC and OneWest are awaiting a ruling in their lawsuit. The judge's ruling could, as HSBC says in a filing, "cut that Gordian knot" and allow OneWest to provide a modification. The question for Jeter is whether that would come too late.