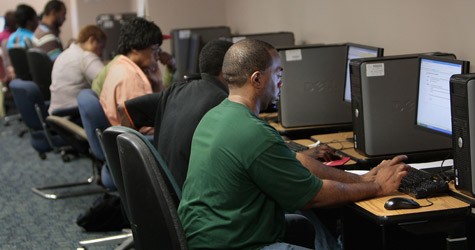 A few governors were loud about rejecting stimulus funding for expanding unemployment insurance, but many states have quietly let their share of the funding sit in Washington.

So far, only about half of the $7 billion included in the stimulus package has been claimed by states. (See our interactive map and chart.) What's more, about two-thirds of the funding that has been distributed has gone to states with existing laws, and not to states with newly expanded benefits.

Four states have explicitly rejected the funding, but many others have so far failed to pass legislation qualifying them for incentive payments.

States have until 2011 to qualify for the funding, but government projections predict that by then the worst of the unemployment crisis will be over.

Under the stimulus bill, states can qualify for the extra funding by extending unemployment insurance to new categories of workers. To receive a third of the funding, they must begin using something called an alternative base period, which would allow more low-wage workers to receive unemployment benefits.

To get the other two-thirds of the cash, they must adopt at least two other changes from a list that includes covering part-time workers and offering $15 extra per week for each dependent.

If states meet the requirements, they qualify for a federal lump sum payment that will cover the cost of expansion for at least three years, or longer in many cases. It was on those grounds – that after the federal funding runs out states will have to find another way to cover the cost – that Louisiana Gov. Bobby Jindal, Mississippi Gov. Haley Barbour and others that said they would reject the funding.

Advocates have been calling for expanding benefits for years as a way to make sure that unemployment benefits are available to non-traditional workers who make up an increasing proportion of the workforce.

In the early 1990s, a bipartisan commission convened by President Bill Clinton urged states to adopt reforms, similar to those in the stimulus bill, which would include more workers in the unemployment insurance system.

The language in the stimulus bill – with its carrot-and-stick approach to getting states to adopt changes -- is nearly identical to House and Senate bills introduced two years ago during the 110th Congress. An original sponsor of the Senate bill: then-Sen. Barack Obama.

Advocates for expanded unemployment insurance declared the glass half full: After all for the first time a majority of states, 34, have adopted the alternative base period, even though 19 of those states used it already. Likewise, 27 states now offer unemployment benefits to part-time workers.

“These are workers who have been left out of the system,” said Maurice Emsellem, co-policy director of the National Employment Law Project. “Now workers who were falling through the cracks of the unemployment system will be able to find their way back in.”

Supporters are hoping, Emsellem said, that states will continue to offer expanded coverage even after federal funding stops, which seems likely in many states because of the difficulty of dialing back benefits for the unemployed once they are in place.

Some states do seem poised to keep at least some of the changes.

In Alaska, which qualified for almost $16 million in funding by adopting the alternative base period, state legislators were swayed by the relatively low cost of covering an estimated 1,700 additional workers, said Larry Persily, legislative aide to state Rep. Mike Hawker, a Republican who co-chairs the House Finance Committee. Ultimately, the legislation was passed nearly unanimously, though the House is Republican-controlled, the Senate is evenly split, and Gov. Sarah Palin announced her intention to reject the aid.

“We spent a much longer time looking at the proposal than the governor did,” Persily said.

Though the stimulus bill bars states from including sunset provisions in their bills, some states have said they plan to take the cash and roll back the expanded eligibility once they are allowed to do so.

Tennessee Gov. Phil Bredesen, a Democrat, initially announced qualms about accepting the funding on the basis that it could result in higher unemployment insurance costs for the state. Ultimately he announced his support for accepting the funding – but only with the explicit understanding that benefits will be rolled back when the recession is over.