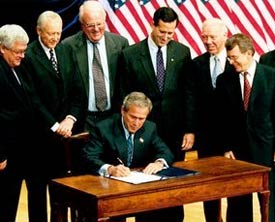 A controversial midnight regulation expanding health workers' right to take a moral stance against abortion (or any other procedure that rankles their conscience) sailed through final Office of Management and Budget approval this week and, barring an act of Congress, will soon become law.

The rule would deny federal funding to any medical facilities that discipline workers – from secretaries to managed care executives – who refuse to assist in procedures they find morally troubling. It’s one of many midnight regulations we’ve been tracking.

The ‘provider conscience’ rule applies to any procedure performed in a federally funded medical setting that "violate(s) an individual’s conscience," but it most pointedly singles out abortion. It goes beyond existing laws that bar religious discrimination against workers and protect medical professionals who refuse to perform tasks they find morally repugnant.

The new rule pitches a bigger tent over the types of workers and volunteers who can stage a proverbial moral sit-in. While workers directly involved in procedures used to get special protections, now they would extend to anyone from a scheduler arranging for abortion counseling to a janitor cleaning an operating room.

Those were the terms of the regulation proposed several months ago by Michael Leavitt, secretary of the Department of Health and Human Services. Since then, opposition has cropped up from 28 senators, the American Medical Association and a Bush appointee who enforces employment discrimination laws.

The Alliance of Catholic Health Care and the U.S. Conference of Catholic Bishops support the rule. As the Los Angeles Times has noted, the two groups argue the proposed rule goes beyond abortion and bolsters the rights of doctors refusing to hand out the morning-after pill.

The American Medical Association has also noted the sweeping potential for the regulation—and has cautioned against it. The AMA argued that everyone from a physician to a receptionist could refuse to accommodate biomedical to behavioral research. Ultimately, the group argues, the law "seriously undermines patients’ access to necessary health services and information."

The Bush appointee who has objected to the law, the legal counsel to the Equal Employment Opportunity Commission, has argued it treads ground that has been painstakingly mapped under laws that prohibit religious discrimination in the workplace. Two other commissioners on the EEOC have also said they object to the proposal.

The established laws protect workers from doing tasks they find objectionable, such as a pharmacist who refuses to fill a prescription for oral contraceptive. But they also assure that the worker’s objection does not put an "undue burden" on the employer by hindering it from fulfilling its mission. The new rule, the commissioners argue, could hinder a pharmacy’s ability to do business or a patient’s ability to access necessary care.

HHS spokesman Kevin Schweers told us he could not comment on whether the agency changed the regulation since its August draft, only saying, "HHS officials made considerable efforts to address all comments that were received." Changes, if any were made, would appear in the yet-to-be-released final rule.

The regulation could appear any day in the Federal Register. The coming Obama administration could try to reserve the rule, though as we’ve noted, that’s not an easy task.