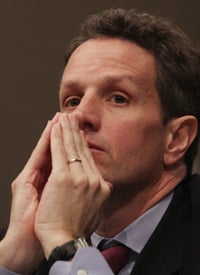 As Timothy Geithner inched closer to becoming Treasury Secretary, document hounds got a treat: 100 pages of Geithner's answers (PDF) to pointed written questions from Senate Finance Committee members, who today voted 18-5 in favor of his confirmation.

Geithner, the president of the Federal Reserve Bank of New York since 2003, had less than 24 hours to respond to a wide range of queries covering his past nonpayment of taxes to his record as a top financial regulator.

Several senators honed in on his role in the supervision of Citigroup, asking about Geithner's contacts with top officials of the beleagured banking conglomorate, which has benefited from a $52 billion government rescue.

A ProPublica investigation this month found that the Fed had lifted some restrictions on Citigroup, allowing it to engage in risky ventures with insufficient capital.

Geithner, in answers released today, acknowledged that "Citigroup's supervisors, including the Federal Reserve, failed to identify a number of their risk management shortcomings and to induce appropriate changes in behavior."

Responding to another question, Geithner said that he personally "led a number of initiatives to strengthen the financial system ahead of the crisis" that "helped limit" the damage, "but those efforts were inadequate."

When asked to detail his "personal involvement" in supervising Citigroup and relaxing oversight in 2006, he gave a general, broader answer.

"The Federal Reserve and other responsible supervisors made those decisions on the basis of a judgment that the firm had made sufficient progress," he explained, and "we continued to carefully review" further actions by Citigroup.

Additional information, he suggested, would come from the Federal Reserve, which he said he would ask "to provide any documentation that it [sic] is appropriate in response to your questions."

A few queries pertained to his contacts with Citigroup executives, including Robert Rubin. In the late 1990s Geithner worked for Rubin, who was then the secretary of the Treasury. Rubin then joined Citigroup, where he was a senior official and director until his resignation earlier this month.

Geithner, when asked if he had any contact with Rubin on the New York Fed's 2006 actions or relating to Citigroup's risk-management practices, responded: "I do not recall any such contact, and, as a general matter, I conducted these type [sic] of discussions on supervisory issues with the Chief Executive Officer and relevant Board members."

Rubin, according to Geithner, was one of the people consulted by the New York Fed during the 2003 process that resulted in Geithner's selection as Fed president, but he didn't answer whether "anyone else at a firm you regulated" was involved in the vetting.

Finally, Geithner said he was personally involved in discussions last fall relating to government assistance to Citigroup, but "I removed myself from any direct role in discussions with the firm on Friday evening, Nov. 21."

That Friday afternoon, the news leaked out Geithner was President-elect Obama's choice to head Treasury.