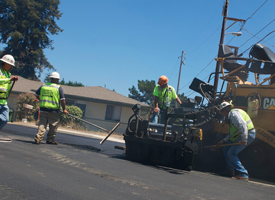 Less than 6 percent of the stimulus money approved for highway projects so far is going toward new construction, according to a ProPublica analysis of federal transportation data. The vast majority, about 76 percent, will be spent repaving and widening roads.

The details come from an updated list, released yesterday, of 2,651 projects approved for funding by the U.S. Department of Transportation. We first reported on the data last month after President Obama announced the 2,000th stimulus transportation project. Since then, more projects have been given the green light, and DOT has committed more than $9 billion, or about one-third of the stimulus money for highways.

"The primary goal of the [American Recovery and Reinvestment Act] is to put people back to work and create jobs," DOT spokesman Lori Irving said. "Small projects, like resurfacing and widening, create jobs. In addition, the first set of projects advanced were those that were easiest to move, which tends to be smaller resurfacing projects. We expect to see a greater percentage of larger projects in the next set."

See how much progress your state has made.