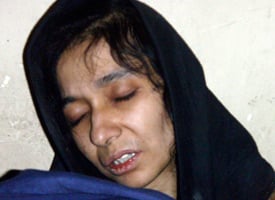 As U.S. and Pakistani officials sort through the confusion following Aafia Siddiqui's transfer to New York after being charged with trying to kill U.S. soldiers and FBI agents in Afghanistan last month, a key question remains: Where has Siddiqui been for the past five years?

The American-trained neuroscientist is being held without bail after firing two shots at American soldiers and FBI agents a day after local authorities in Ghazni, Afghanistan took her into custody for loitering. Some officials are calling her arrest "the most significant capture in five years." She has been linked to at least two al-Qaida members -- one of whom is her husband (PDF), detained in Guantanamo since 2006. She is said to have helped alleged al-Qaida operative Majid Khan gain access to documents to re-enter the United States. (Despite all those allegations, Siddiqui has so far not faced any terrorism-related charges.)

In March 2003, Siddiqui disappeared after visiting her parents' home with her three children in Karachi, Pakistan. The mystery of her whereabouts since then has caused an uproar among human rights groups, most of which are looking in the general direction of the U.S. government. A press release issued by Siddiqui's lawyer, Elaine Whitfield Sharp, claims Siddiqui said she had been held in U.S. custody at Bagram Air Base in the Parvan Province of Afghanistan.

"We do know she was at Bagram for a long time. It was a long time. According to my client, she was there for years and she was held in American custody; her treatment was horrendous."

Joanne Mariner, director of terrorism and counterterrorism at Human Rights Watch, speculated that Siddiqui may be a detainee known as "Prisoner 650" or the "Gray Lady of Bagram" -- allegedly the only female prisoner at Bagram.

"Obviously, this is a rare occurrence," Mariner said. Siddiqui "was the only woman on our list of disappeared people. Just the fact that this was a Pakistani woman suggests that this is Siddiqui. It's not proof, but it raises the possibility."

Since Siddiqui was detained last month, officials at the Justice Department and the CIA have maintained that she had not been in U.S. custody.

"As the Department of Justice has said, this individual was not in U.S. custody before she was detained on July 17, 2008," CIA spokesman George Little said.

Other groups, such as the Human Rights Coalition of Pakistan (HRCP), insist that's not true.

"To say that she had been taken into custody only on July 21, 2008 is a blatant lie, as transparently ugly as any falsehood can be," HRCP co-chairperson Iqbal Haider said in an Aug. 5 press release. "The insinuation, that she had been hiding herself since 2003, is a travesty of truth, an affront to people's common sense."

President Bush acknowledged in September 2006 that secret CIA-operated, international prisons existed to hold al-Qaida members and other suspects associated with the war on terror. Khalid Shaikh Mohammed, the "principle architect of the 9/11 attacks" (PDF), was picked up and disappeared in a March 2003 raid in Rawalpindi, and Ramzi bin al-Shibh was captured and disappeared following gunfire in Karachi in September 2002.

Calls and e-mails about Siddiqui to a spokeswoman for Bagram Air Base and to Pakistan's Interior Secretary Kamal Shah have not been returned. We'll post their response if we hear from them.