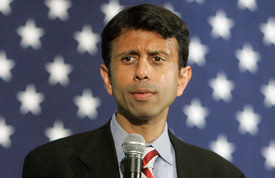 The race has begun for high-speed rail dollars. States applied for billions of dollars in stimulus funding for rail projects Monday, with California alone seeking $1.1 billion in 42 separate applications, reports The Wall Street Journal. The Recovery Act offers $8 billion in funding for passenger rail projects, only some of which is likely to be spent on high-speed rail; the rest will likely go toward improving the existing rail network. (See the Journal’s interactive map of high-speed rail corridors.)

The New York state comptroller has rejected his first stimulus contract, a $7 million job to paint 61 bridges along Interstate 84, according to spokeswoman Jennifer Freeman and the Daily News. Steed General Contractors, which got the contract from the state’s Transportation Department, may be a front company for a contractor that is barred from getting state work until October 2012, the News reports. (Read the comptroller’s letter to the state DOT (PDF).)

A school district in Connecticut has hired a watchdog to make sure stimulus dollars are spent properly, the New Haven Register reports. The watchdog and the school district’s superintendent, who have the same last name, are not related, according to the paper. But in the comments section, readers raise questions about whether the new hire may be related to another city official.