President Obama on Monday signed into law a bill that could help expedite the long process of constructing a hurricane protection system for the Texas coast, including the particularly vulnerable Houston region.

The “Water Infrastructure Improvements for the Nation,” or WIIN, Act contains a major provision of another bill U.S. Sen. John Cornyn filed in April — the month after The Texas Tribune and ProPublica published an interactive report exploring the dire impacts of a monster storm hitting the nation's fourth-largest city and its massive petrochemical complex. Scientists are still fine-tuning plans to protect against such an event, which they say could kill hundreds, if not thousands, of people and cripple the economy and environment. 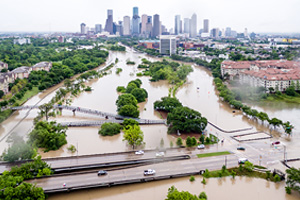 Climate change will bring more frequent and fierce rainstorms to cities like Houston. But unchecked development remains a priority in the famously un-zoned city, creating short-term economic gains for some while increasing flood risks for everyone. See the interactive report.

Most agree on the need to build a project known as the “coastal spine," a massive floodgate and barrier system, but there is no official consensus plan. (State lawmakers have asked scientists to settle on a plan to protect the coast, but they’re still in disagreement.) The U.S. Army Corps of Engineers, which will have the final say on what plan to pursue and is conducting its own study of the issue, has estimated that construction on any such system for Texas couldn’t begin until 2024 at the earliest.

The bill Cornyn filed in April, called the "Corps’ Obligation to Assist in Safeguarding Texas," or COAST, Act, was designed to hurry things along by requiring the Corps to take local studies on the issue into account (one by a six-county coalition, in particular) and by eliminating the need for Congress to authorize construction of whatever project the Corps ends up recommending.

The bipartisan WIIN Act includes only the former provision requiring the Corps to account for local studies, meaning Congress still will have to sign off on any plan. (The COAST Act passed the Senate in September, but never passed the House.)

Local officials have welcomed the high-profile assistance. But even if the latter provision had endured, it's unclear how much it would have actually sped things up.

The Corps has already said it would consider local studies, for example. And while getting rid of the need for congressional authorization could shave off a small amount of time, the real hurdle will be getting Congress to help fund what is sure to be a multibillion-dollar project.

Still, Cornyn described the signing of the legislation Monday as a major step toward shoring up a vulnerable coastline.

“The folks who live along Texas’ upper Gulf Coast are seeking certainty in the face of natural disasters, and this law takes a big step toward that,” he said in a statement. “I’m thankful the president has signed this bill into law so we can help streamline the Army Corps’ study as we continue working to protect Texans living along our coast.”