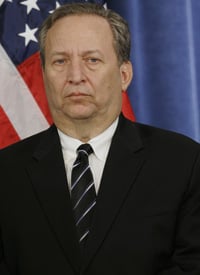 We didn't have to wonder for long whether the Obama administration would tap the second half of the $700 billion bailout bill. (The Treasury has committed the first $300 billion of the TARP. Here's our running list of the recipients.)

In a letter to Congress today (PDF), Lawrence Summers, Obama's pick to lead the National Economic Council, made the initial pitch.

Judging from the letter, however, it's hard to gauge just how differently the Obama team would manage the bailout money. The three-page letter is long on general promises but short on specifics.

For instance, Summers calls for "strict and sensible conditions on CEO compensation and dividend payments" but doesn't say how the Obama administration's conditions will differ from the ones already in place.

Summers' letter says that companies receiving "exceptional assistance" will be "subject to tough but sensible conditions" such as limiting exec pay or preventing dividend payments. Companies that get TARP money are already forbidden from increasing their dividend payments or paying top execs golden parachutes. It's not clear what the Obama administration would do beyond that.

It's also not clear from Summers' letter what qualifies as "exceptional assistance." Bush's Treasury Department has applied stricter terms for ailing companies like AIG or Citigroup, while allowing looser arrangements for "healthy banks" participating in the Capital Purchase Program. From the letter, it seems the Obama administration might be considering something similar.

The letter does detail three big differences with the Bush administration. But because they are phrased so generally, it's unclear how they'd play out in practice.

Second, Summers stresses that the administration will launch a "sweeping effort to address the foreclosure crisis" -- but just what role the TARP money will play in that effort remains unclear.

And third, Summers writes that Obama wants his Treasury Department to "monitor, measure, and track what is happening to lending by recipients." Bush's Treasury has been resistant to that idea, only recently announcing that regulators would be analyzing quarterly data from banks with that aim.

President Bush made the official request for the second $350 billion today, triggering a 15-day window during which Congress can reject it. Summers writes that Obama is "committed to working closely together with the Congress on all aspects of our financial recovery plan," meaning that today's proposal is likely to become much more specific over the next couple weeks.

We'll keep you updated on those specific proposals as they're put forward. But in the end, the Obama administration seems likely to emerge with a good deal of flexibility of how the money will be spent. As Summers writes, "the American people need to know that going forward our government has the resources to do whatever is necessary to stabilize our financial system." (Emphasis ours)