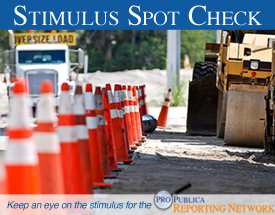 Vice President Joe Biden touted this as the summer of stimulus, a time when the Obama administration would ramp up road construction and put “shovels in the ground.”

That promise appears likely to play out – albeit a bit later than expected, according to our Stimulus Spot Check, a status report on road and bridge projects conducted by volunteers in the ProPublica Reporting Network (how to participate).

ProPublica pulled a random sample of 520 of the roughly 6,000 approved projects to examine stimulus progress around the country. That sample is large enough to estimate national patterns with a margin of error of plus or minus 4.5 percentage points. ProPublica asked members of its reporting network to find out if states had advertised the projects, awarded contracts or actually started construction work.

While about 30 percent of the projects in the sample had broken ground by midsummer, at least 66 percent had a contract and 76 percent had been put out to bid – suggesting an impending gusher of stimulus work in late summer and early fall.

In addition to the survey, ProPublica reviewed federal transportation data to determine how many stimulus projects reached a critical juncture – receipt of a “notice to proceed,” the last bureaucratic step before construction can start.

The data show some surprising trends: a wide range of progress among states, a tendency for cold weather states to have more projects under way, and a relatively bigger lag getting started in states where unemployment is highest.

New Mexico has achieved the final green light for construction on 100 percent of its approved projects, for example, while fewer than 4 percent of Florida’s projects had advanced to the same stage, the notice-to-proceed data show.

Nationwide, the data show that 44 percent of federally approved road and bridge projects had been awarded to contractors and authorized for construction.

How fast states are moving on stimulus road construction became a political flashpoint after the Democratic chairman of the House transportation committee commended some governors and shamed others for getting off to a slow start.

The Democrats’ report, based on older data than that reviewed by ProPublica, singled out states with Republican governors – including Florida’s Charlie Crist – for criticism. But states led by Democrats are also trailing other states’ progress, ProPublica’s data show, including Michigan, New York and Kansas.

Why some states fell behind

The Spot Check sought to get beyond the politicking for a closer grasp of factors that explain why progress varies among states. The evidence suggests multiple variables are at play, including whether a state began lining up projects while the stimulus bill was being drafted in January and February. Some states had more internal hurdles to climb to get projects approved or required legislative action. Cold states with a short construction window have to move faster.

Before construction can begin, states must submit projects to the U.S. Department of Transportation for review. Many states, including Florida and Michigan, took time to survey regional planning groups and the public to identify projects.

After getting a sign-off from the DOT, there’s a lag time as states advertise the projects for bid, award contracts and give contractors the official green light by issuing a notice to proceed.

More than 70 members of the ProPublica Reporting Network agreed to investigate projects in their states. Chelsey Perkins, a recent college graduate who aspires to be a journalist, volunteered to spot-check all Minnesota projects in our sample.

Perkins called the state DOT and contractors. She found that six of the 12 projects had not yet started. Of those that had, just two of the companies had hired new workers – one hired six people, the other 25 – in addition to saving jobs within their companies. Four companies told Perkins they had not hired new employees but that the stimulus allowed them to retain members of their workforce.

In Colorado, volunteer Erica Grossman checked up on a $31 million repaving and bike trail project and determined that work started July 11. The contractor, Castle Rock Construction, told state officials it has so far hired six new employees, saved 135 positions and had 250 employees working on the project, Grossman said.

But in most cases, approved projects were still in the pre-construction phase, the Spot Check reporters found. “Construction is supposed to begin the first week of August, but I have yet to see any progress beginning,’’ wrote Coulter Jones, who looked into a $3 million paving project in Luzerne County, Pa.

Reports from the field came in over a two-week period in late July, so it’s possible some have advanced in the meantime. Jones checked back last week, for instance, and found that work had begun on the Pennsylvania project.

In some cases, construction delays appeared to be the result of contractors’ schedules rather than red tape.

Two paving projects in Missouri received notices to proceed in April, for instance, but no construction had begun four months later. Carrie Lewis, a spokeswoman for the Missouri DOT, said companies are under no obligation to start as soon as possible. The only requirement is that the work be done by end of the year.

A fast start in New England

The federal Transportation Department data, listing the status through Aug. 7 of approved road and bridge projects in all 50 states, show a huge disparity in progress nationwide.

New Mexico is the furthest ahead when it comes to green-lighting projects, having issued a notice to proceed for all its approved projects. A New England contingent of Maine, Vermont, New Hampshire and Rhode Island followed in succession.

Some states receiving the most stimulus money for transportation have been among the slowest to get off the blocks. That’s true for Florida, which had received $1.1 billion for 313 projects. The state has authorized construction on 3.6 percent of them. California, getting $1.8 billion so far for 489 projects, has given the go-ahead to 8 percent.

Checking states’ progress at any one point, of course, doesn’t tell the full story. States can move up or down the rankings significantly from one week to the next, as batches of projects move from the contracting phase to construction. In addition, the data Propublica used is reported to the Transportation Department by states and may not be up-do-date with the latest state information.

For its pre-recess progress report, the House Transportation and Infrastructure Committee relied on DOT data from June to anoint Wyoming the “best” at spending stimulus money. The committee weighted its rankings based on the number of projects advertised, contracts awarded and projects started.

Rep. Jim Oberstar, D-Minn., scolded the governors of Hawaii, South Carolina and Florida for falling behind other states. But the committee declined to release the full set of rankings, so it wasn’t clear how other states stacked up in the panel’s list.

Some say the progress reports miss the big picture. Kevin Thibault, the Florida DOT’s assistant secretary of engineering and operations, said politicians and the public would do better to consider whether projects that are moving forward have a long-term economic impact.

“If you look at Florida’s projects, most of them are adding capacity,” said Thibault. “I am widening roads. I am adding interchanges. That’s versus a resurfacing project or a guardrail project. Two or three years out, not only will the Florida region see the job creation benefit, but they’ll see the increased movement of goods and people,” he said.

If achieving those goals means it takes a little longer to get started, Thibault said, that’s an acceptable trade-off.

Two other patterns show up in a statistical analysis of the federal data.

Over all, states with colder winters were more likely to have a greater share of projects completed or started, an apparent reflection of the shorter construction season.

“Unlike Texas, we can’t work through the winter,” said John Zicconi, a Vermont Transportation Agency spokesman. Only Alaska, the northernmost cold state, was behind the curve.

States with higher unemployment are also spending and completing projects more slowly. Not all states fit the pattern, but ProPublica’s analysis did find a significant relationship between these variables and forward progress.

Michigan, with the highest unemployment rate in the country – 15.2 percent – had given a green light to only 62 of 325 projects, the data show. Political overhead helps explain why the state is off to a slow start, officials there said.

“We had to get approval from the Legislature,” said Michigan’s DOT spokesman, Bill Shreck. “We have about 14 metropolitan planning organizations, and we sent all of our stuff through them. It helps with buy-in in the long run.”