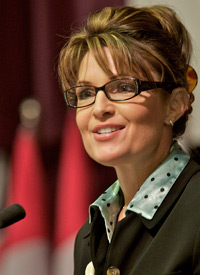 This morning's Washington Posttakes a bite out of another one of Gov. Sarah Palin's reformer boasts. In addition to touting her supposed opposition to the "Bridge to Nowhere," Palin has crowed about cutting back on the perks of being governor.

During her speech before the Republican National Convention last week, Palin said she "got rid of a few things in the governor's office that I didn't believe our citizens should have to pay for": "that luxury jet," which she "put on eBay," and the governor's personal chef. (The jet actually didn't sell on eBay and was then sold to an Alaskan businessman.)

But as today's Post reports, Palin apparently believes "our citizens should have to pay" for her to live at home. The capital of Alaska is Juneau, but Palin prefers to stay in her family home in Wasilla, which is about 600 miles away. Palin commutes to work in a state office building in Anchorage, a 45-minute drive.

Palin has drawn a per diem allowance for 312 nights spent at home since she took office 19 months ago, the Post reports, for a total of $16,951. Per diem expenses are supposed to cover officials when they're traveling on state business. The Post quotes "officials" as explaining that Palin has drawn the per diem because her "duty station" is Alaska's capital, Juneau -- the logic being that in staying at home, Palin is effectively traveling.

As a gubernatorial spokeswoman succinctly puts it, "The governor is entitled to a per diem, and she claims it."

The Post also dives into the Palin family's travel expenses billed to the state -- a total of $43,490. Palin did indeed drastically cut the amount spent on personal gubernatorial travel from her jetting predecessor Gov. Frank Murkowski, a drop from $463,000 in 2006 to $93,000 in Palin's first year in office.

But the Post also details a list of flight expenses incurred by Palin's husband and children. It's not clear from the story whether this violates Alaskan laws.

On the one hand, the state's finance director tells the Post, "We cover the expenses of anyone who's conducting state business. I can't imagine kids could be doing that." On the other hand, that same director points out the looseness of the laws. Palin's spokeswoman argues that Palin is entitled to have her family's travel costs reimbursed because many of the hundreds of invitations Palin receives include requests for her to bring her family, effectively making the trips a matter of state business.