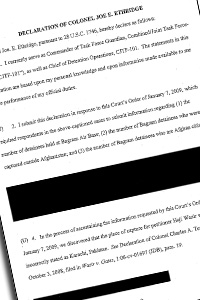 An untold portion of the 600 detainees at Bagram Airfield in Afghanistan were captured outside the country while engaged in peaceful activities, lawyers and court documents say, and imprisoned alongside Afghan warriors. The U.S. government has argued that battlefield rules put the prisoners beyond the reach of civilian justice, even though they weren't captured in the Afghan war zone.

A lawsuit by four Bagram detainees has revealed striking similarities between the prison in Afghanistan and the Guantanamo Bay facility. To determine the full measure of that resemblance, District Court Judge John D. Bates instructed government lawyers to turn over the total number of captives nabbed abroad. That crucial number was redacted from public court documents (PDF) filed in the case. Recently, Bates has turned to the Obama administration, which recently put the Gitmo military commissions on hold, for guidance.

The Bush administration argued that the whole world is a battlefield after Sept. 11 and chose to treat counterterrorism efforts as military actions, rather than law enforcement. Those strategies led to indefinite detentions of terrorism suspects at Guantanamo Bay without due process. While battlefield military detentions are traditionally beyond the scope of civilian court review, the government has sought to extend the global battlefield construct (PDF) to detainees who were brought to Bagram from peaceful cities.

The four detainees seeking to challenge their detentions in Bates' court were nabbed abroad and have not been charged, according to their court petitions. Their filings say that one was dragged (PDF) from his house in Karachi, Pakistan, while his wife protested, and another was abducted (PDF) during a business trip in Thailand. A third man vanished from the streets of Dubai, according to his lawyer. Some have been imprisoned for more than six years.

By contrast, about 570 of Bagram's detainees are Afghans, most of whom were corralled on their native battlefield, a Pentagon spokesman told ProPublica, revealing numbers that were described as classified in a redacted version of the court filing (PDF). U.S. officials have argued that the prisoners would return to the battlefield if released, and that in most cases, Bagram is only a temporary holding facility for Afghan fighters who are eventually transferred to locally operated facilities, like the Afghan National Detention Facility at Pol-e-Charki.

But another 30 are not Afghan citizens, Lt. Col. Mark Wright, the spokesman, said. Some of that group may have come to Afghanistan to fight, and some Afghans were likely apprehended on foreign soil, so it is not clear how many fit the Gitmo paradigm.

It would seriously impair America's ability "to wage war if the military were limited to detaining only those enemies who were captured on a traditional battlefield engaging in active combat," government lawyers argued (PDF) in the case of Haji Wazir, one of the Bagram detainees. But to lawyers for the detainees and experts in national security law who are not involved in the case, the distinction between battlefield detainees and those picked up far afield is essential to making the case that Bagram could become another Gitmo.

The judge requested the numbers to help focus whatever ruling he will make in the case, Tina Foster, a lawyer for Wazir and other detainees, said. The Supreme Court decided -- three times between 2004 and last year -- that habeas corpus applies to Gitmo, but the naval base is safely under U.S. control, whereas Bagram operates in a war zone.

"Once you move beyond what the Supreme Court said about Guantanamo Bay, it opens up a new door," said Scott Silliman, executive director of the Center on Law, Ethics and National Security at Duke University. A ruling that all Bagram detainees could invoke the writ would support future arguments that the constitutional protections of U.S. courts reach anywhere in the world, he said. In short, a decision extending the reach of habeas to a foreign U.S. military base could signal the transition from a global battlefield to a global American suburb.

Coming up with his own definition of the battlefield will be an early challenge for President Barack Obama, Silliman said.

"What's being tested is the government's assertion [of a global battlefield]. Will the Obama administration adhere to that or will they come out with a new, more narrow definition?" If the definition narrows significantly, it could mean that military detention would no longer apply to certain detainees, solving the judge's quandary.

Bates has decided to wait and see. The Obama administration instructed prosecutors to ask judges in military commissions and civil courts to suspend cases involving Guantanamo detainees during his first evening in office. Judge Bates surprised lawyers in the Bagram case by following suit without any prompting.

In a court order last Thursday (PDF), Bates said he would "provide the new administration with the same type of opportunity [to offer new, specific detention policies] in these Bagram Airfield habeas cases." The Obama administration has until Feb. 20 to weigh in on Bagram.

Bates explained that he reached the decision after reviewing the classified numbers delivered the week before by the Pentagon and an executive order signed Thrusday by Obama that ordered the closure of the Guantanamo Bay facility within one year.