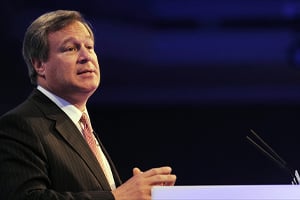 Lawmakers often contend that lobbying, campaign contributions and fancy parties do not sway their votes, yet at least one company begs to differ. As The Washington Examinerreports, Pfizer based its recent decision to grant CEO Jeff Kindler a raise, at least in part, on his "developing and advancing U.S. and global public policies that serve the overall interests of our Company and our shareholders."

The language, buried in the company's most recent proxy statement filed with the Securities and Exchange Commission, explicitly cites Kindler's efforts in "opposing legislation that would allow for importation of prescription drugs."

Pfizer contends that importing these medicines "could jeopardize the integrity of the drug supply chain in the U.S," while groups like AARP say it's a safe and cost-effective solution to lowering drug prices.

An effort to allow importation of cheaper drugs from Canada and Europe failed last December. Sen. Byron Dorgan, who spearheaded the effort, told reporters after the vote that "the drug industry has a lot of clout in this town, and they demonstrated that tonight."

As the Sunlight Foundation noted in an extensive reporthighlighted by ProPublica, the pharmaceutical industry lobbying group PhRMA agreed to support the White House's health care reform effort as part of a deal that included a pledge by the administration to oppose drug importation.