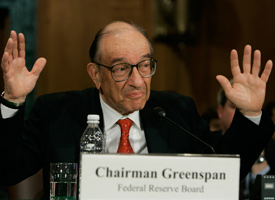 It was only a matter of time before "The Reckoning," the New York Times'series on the roots of the financial crisis, concentrated on Alan Greenspan.

Today's installment comes with a simple takeaway: Greenspan, the chairman of the Federal Reserve from 1987 until 2006, had enormous power on Capitol Hill because of his perceived infallibility. But "The Oracle," as he was called, was wrong about one big thing: derivatives. Despite ample warnings that the largely unregulated derivatives market could lead to financial disaster, Greenspan praised them as "extraordinarily useful" and rebuffed repeated attempts to regulate them.

But they did lead to disaster. One kind of derivative in particular, the credit default swap, was one of the main causes of the collapse of Bear Stearns and Lehman Brothers and the near-collapse of AIG.

Essentially a form of insurance (it's not actually called insurance to avoid regulation), credit default swaps allow investors to protect themselves. They proved especially useful to those making risky bets on mortgage securities over the past several years. The total market for credit default swaps in 2002 had a notional value of $2.2 trillion. In 2008, it's estimated to be $54.6 trillion.

Because the market is unregulated, the extent of the contagion is largely unknown. As one hedge fund manager puts it, credit default swaps have become "the dark matter of the financial universe."

As the Times documents, the warnings were clear and Greenspan's response to them consistent.

In 1992, Rep. Edward Markey (D-Mass.) asked the General Accounting Office to study derivatives. The GAO's report identified "significant gaps and weaknesses" in the regulatory oversight of derivatives. And its prediction was right on:

"The sudden failure or abrupt withdrawal from trading of any of these large U.S. dealers could cause liquidity problems in the markets and could also pose risks to others, including federally insured banks and the financial system as a whole. In some cases intervention has and could result in a financial bailout paid for or guaranteed by taxpayers."

Later, in 1997, a lawyer on the Commodity Futures Trading Commission pushed to regulate derivatives. That, too, went nowhere, largely due to Greenspan's opposition, along with then-Treasury Secretary Robert Rubin. The two even pushed Congress to strip the CFTC of regulatory authority over derivatives.

And then there is Warren Buffet's famous warning in 2003 that derivatives were "financial weapons of mass destruction."

Greenspan's opposition to regulation has its source in his libertarian philosophy, the Times notes, marshalling a number of his quotes from over the years about how the market will take care of itself.

In 1994: "Risk in financial markets, including derivatives markets, are being regulated by private parties... There is nothing involved in federal regulation per se which makes it superior to market regulation." The risk of a crisis stoked by loose derivative trading was "extremely remote."

And then in 2000: "I believe that the general growth in large institutions have occurred in the context of an underlying structure of markets in which many of the larger risks are dramatically — I should say, fully — hedged."

And then in 2003: "What we have found over the years in the marketplace is that derivatives have been an extraordinarily useful vehicle to transfer risk from those who shouldn't be taking it to those who are willing to and are capable of doing so." It would be a "mistake" to increase regulation.

So what does he say now? Greed ran rampant on Wall Street. As he put it last week: "In a market system based on trust, reputation has a significant economic value. I am therefore distressed at how far we have let concerns for reputation slip in recent years."

Greenspan didn't respond to the Times' inquiries, instead referring the reporter to his 2007 memoir:

When the paperback version came out this year, Mr. Greenspan wrote an epilogue that offers a rebuttal of sorts.

"Risk management can never achieve perfection," he wrote. The villains, he wrote, were the bankers whose self-interest he had once bet upon.

"They gambled that they could keep adding to their risky positions and still sell them out before the deluge," he wrote. "Most were wrong."

No federal intervention was marshaled to try to stop them, but Mr. Greenspan has no regrets.

"Governments and central banks," he wrote, "could not have altered the course of the boom."