Among the projects are a $1.2 million guardrail for an Oklahoma reservoir that is virtually dry, a homelessness grant for a New York suburb without a homeless problem and a little-used Wisconsin bridge to a country club and Rusty's Backwater Saloon, which rents pontoons and sells Steak-A-Rooni for $5.25.

"After a review of thousands of projects, it is fair to claim that there are some successes, but there are also places where we need to do better," Sen. Tom Coburn, R-Okla., wrote in a letter accompanying the report.

The negative appraisal comes as the Obama administration struggles to manage the public image of the $787 billion stimulus plan, which passed in February. Republicans have seized on high unemployment figures to argue the stimulus isn't working. Meanwhile, the administration has released report after report to commemorate the 90th day of the stimulus, the 100th day and the next 100 days.

Today's report mimics one released in late May by Vice President Joe Biden to mark the stimulus package's first 100 days. But where Biden's report tried to tug at heartstrings, Coburn's is meant to tug at your nerves.

Biden tells the story of Norman and Ida Layne of Cullen, Va., who received loans from the stimulus package that will allow them to keep the family dairy and hog farm another generation.

Coburn chronicles the tale of Optima Lake, a 1960s Army Corps of Engineers project to improve the water supply in Oklahoma's panhandle. The lake never reached more than 5 percent of its capacity and sits dry for much of the year. Photographs in the report depict a boat ramp in the middle of a field and a sign reading "Caution: Tumbleweeds on Roadway." 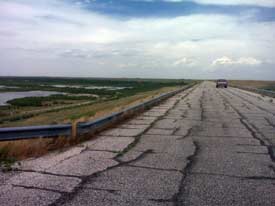 The Corps' initial project list included $1.2 million to replace the guardrail. "One thing is sure," Coburn's report states, "if visitors are clever enough to get past the new guardrail they will not have to worry about falling into the water."

Ed DeSeve, the president's senior adviser in charge of the stimulus, said in a statement that Coburn's report is full of inaccuracies and includes projects that have been stopped or never approved.

"With 20,000 projects approved, there are bound to be some mistakes," DeSeve said. "When we find them, we have been transparent about it and worked on a bipartisan basis to shut them down immediately."

The guardrail project, for example, was halted last week.

Since lawmakers began debating the stimulus in January, Republicans have tried to paint the legislation as a bundle of boondoggles. One of the first targets was the salt marsh harvest mouse, which was portrayed as a cause célèbre for House Speaker Nancy Pelosi. But the mouse was nowhere in the bill and never championed during the debate. Instead, it was on a list of several animals native to Bay Area wetlands being restored with stimulus money.

Then, in response to President Obama's first speech before Congress, Louisiana Gov. Bobby Jindal mocked $8 billion for high-speed rail, which he said would create a levitating train from Las Vegas to Disneyland. The president's plan released in April made no mention that such a route was a priority.

Neither project is mentioned in Coburn's report. The report instead focuses on projects that have been criticized in newspapers and on television by local officials.

"I was surprised as anyone when I got the call that the bridge was going to be fixed," Dave Lucey, Arena, Wis., town chairman, told the Milwaukee Journal-Sentinel after finding out that a bridge leading to a private campground was being fixed. "I can tell you that bridge is a low priority for us."

The report includes a mix of recreational and historic sites, arts projects and fish hatcheries as well as little-used bridges and border crossings. It also details some unintended effects of the stimulus, such as Social Security checks being sent to dead people and one community's utility rate hike to cover the cost of a stimulus loan.

But not all projects in the report are opposed by local officials.

One is a $3.4 million "ecopassage" that will help turtles cross a highway in Tallahassee, Fla.

The tunnel for turtles seems strange on the surface. A Tallahassee Democrat columnist noted, "When I mentioned this column to a co-worker, he screwed up his face and said, '[Florida State University] is talking about laying off 200 people and we're protecting turtles.' "

The project – which will build a wall along the highway directing the turtles to culverts – has been on local priority lists for several years. Supporters of the ecopassage have even created a Web site calling the road "the world's worst turtle-killing highway" and posting gruesome photos of dead turtles.

The problem exists because U.S. Highway 27 was built on the edge of Lake Jackson, cutting off a natural migration path for pregnant turtles that cross the highway to nest, said Matt Aresco, who formed a group to push for the ecopassage 10 years ago.

The danger increases whenever there's a drought as some years thousands of turtles cross the road seeking freshwater. On one day in 2000, Aresco said, he found 90 turtle carcasses strewn across the highway.

The turtles are also a hazard for drivers, said Joshua Boan, natural resources manager for the Florida Department of Transportation.

"We have a lot of turtles getting killed, but we were seeing a motorist safety issue too," he said. "When they get hit, they become flying objects."