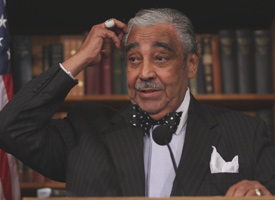 With his recent tax woes, Rep. Charlie Rangel (D-NY) has earned a spot on our Scandal Watch. Check out our roundup of all the pol’s ethics issues.

Today, Rangel called a press conference in an attempt to explain why he didn’t tell the IRS about $75,000 in rental income from a vacation villa. How does the chairman of the House committee that writes tax legislation mess up on his taxes? It’s not that he doesn’t understand the tax code, he said today, it’s that el no habla Español.

His villa is in the Dominican Republic. And Rangel told reporters that he didn’t know about the unreported rental income on his villa because of “cultural and language barriers.... Every time I thought I was getting somewhere, they’d start speaking Spanish.” Although Rangel did acknowledge that he’d been “irresponsible,” he also argued that he hadn’t done anything “morally wrong.”

Whether he did anything against House ethics rules, however, is another question. And Rangel says that he’s asked the ethics committee to probe the matter.