How are you? I, for one, have a cat sitting in my lap. I’ve been busy the last few days reading and replying to many of your thoughtful, interesting responses to the story we published last week, “The Legend of A-N-N-A: Revisiting An American Town Where Black People Weren’t Welcome After Dark.”

If I haven’t gotten back to you yet, I will!

I wanted to share some of those responses and weave in a few of my own thoughts. I’ll start with one email from a southern Illinois resident with roots in Anna, who raised an important question, one I’d been asking myself as I reported the story: “What good do you bring the world by digging up skeletons?” he wrote.

First, I’d like to challenge the notion that skeletons of the past are buried. Nearly everyone I talked to in Anna and Union County knows Anna stands for A-N-N-A (“Ain’t No N-words Allowed”). No, it’s not often talked about on a daily basis. But it doesn’t have to be. People know. I met an 11-year-old there who told me he first heard the saying from his father, who, he said, doesn’t “like black people.”

It’s not the fault of today’s Anna residents that a mob of white Anna men ran black workers out of town in 1909. But 110 years later, Anna’s racial makeup — 95.7% white according to the 2010 census, which makes Anna one of the whitest communities in southern Illinois — remains similar to what it was before the civil rights era. For much of Anna’s history, that demographic was intentional. White people made white communities. White people can change that today.

Here’s another reader perspective, from Twitter: “We need a lot more stories like this. The folks who say it’s only a problem if you talk about it are wrong, but you sense that some of them truly believe it.” — @BadGuysSuck

And this: “… It kills me when folks (white) used to say ‘we got no racial problems’ yet they’ve never asked black folk their opinion or experience about their alleged lack of racial problems. …” — @AhnJonson

I heard people express similar sentiments during my reporting. One woman I spoke with told me that there aren’t many “racial issues” in Anna because there aren’t many black people who live there. It can be easy for white people to not have to think about whiteness as a race. That is one of the issues I wanted to address in the story. 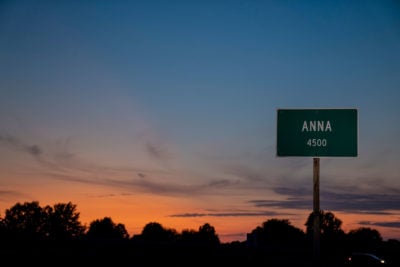 I’m heartened that the story has prompted readers to share stories and memories of their own — from around the country. Anna is not an anomaly. According to the book “Sundown Towns: A Hidden Dimension of American Racism,” by James W. Loewen, there are thousands of sundown towns, places that at some point in their histories were all or nearly all white on purpose, across the country. I’d encourage people to research their own communities. The more stories there are about these places, the better.

Here are two recollections that readers posted on Twitter:

“This reminds me of a shocking event from my teens. In the late 60’s, my dad and I were waiting with our new housekeeper at a bus stop in Burbank, CA, when the police pulled up and told us our housekeeper had to be out of town before sunset-so disillusioning, horrifying, sad.” — @JBEnglish1

“The place was Golden Valley NC. I saw the sign in 1997. I could not find the picture, but I remember the sign, ‘The sun never set on a black man in Golden Valley’ - right on the side of the road. I couldn’t get it out of my mind for a long time, and still think about it.” — @No_Bod_There

Lastly, two responses about the story’s portrayal and characterization of Anna mean a lot to me:

“My family is from this town, and yes I can vouch that these stories are all real” — @z_treece

“This thread explains my hometown better than I can. …” — @gmorris1919

What kept me up at night while I reported this story was the question of whether I could fairly characterize the city of Anna as a whole. As journalists, we check facts. But how do you fact-check the underlying narrative of a community — especially one you do not live in — and how you write about it? Answering that question could be a whole other newsletter. And, of course, perceptions of a community vary greatly depending on your experiences and relation to it.

I asked just about everyone I spoke with in Anna how they would describe their community. I did my best to reflect that, but also acknowledged in the story the potential shortcomings of even trying: “Still, I’m not going to claim I know Anna’s full story — I’m an outsider,” I wrote. “But after hearing A-N-N-A said aloud that night, I realized my race made me a sort of insider, too.”

I’m curious how that acknowledgement of being an insider/outsider struck you. I’m also curious to hear what you think of the story, especially if you are an Anna or Union County resident. Feel free to email me.