As the Spanish police investigated the presence of a notorious Russian organized crime group on the resort island of Mallorca in 2012, they realized that a key figure described by some of the suspects as their “godfather” was a powerful Moscow politician: Alexander Torshin.

Spanish prosecutors decided in the summer of 2013 to arrest Torshin, who was then a senator, officials say. Police set up an operation to capture him during a visit to Mallorca, but he mysteriously canceled the trip at the last minute, apparently as the result of a tip, authorities said. Torshin was never charged, while the other suspects were convicted of money laundering. Last year, he publicly denied any wrongdoing in the Spanish money-laundering case.

Yesterday, McClatchy Newspapers reported that the FBI is investigating whether Torshin, now a deputy governor of Russia’s central bank, funneled money to the National Rifle Association that was subsequently spent in support of the Trump campaign. The NRA reported spending $30 million on advertisements and other aid to Trump, part of a record $55 million that the group spent during the 2016 campaign cycle, according to the McClatchy story.

It is illegal for foreign groups and individuals to contribute directly or indirectly to political campaigns in the United States. A spokeswoman for the FBI declined to comment on the report Thursday.

Documents from the Spanish investigation make clear that the FBI had been looking closely for years at the Moscow-based organized crime group that Spanish authorities say was connected to Torshin. The FBI gave the Spaniards a memo about the group in 2013, and Spanish prosecutors provided information to FBI officials about Torshin, according to interviews and documents.

The gregarious 64-year-old Torshin has been able to cut an extraordinary swath through conservative political circles in the U.S. since then. A gun enthusiast and lifetime member of the NRA, he cultivated the gun lobby and political figures including Congressman Dana Rohrabacher, R-Calif., according to published reports. Torshin also made contact with the Trump presidential campaign and Trump’s inner circle, according to news reports, though at least one of his overtures was apparently rebuffed.

In congressional testimony released publicly Thursday, Glenn Simpson of Fusion GPS, the research firm whose investigative “dossier” in the Trump-Russia affair has caused considerable controversy, told the House Intelligence Committee that the Russian connections to the NRA were suspicious.

“It appears the Russians, you know, infiltrated the NRA,” Simpson said, according to a published transcript. “And there is more than one explanation for why. But I would say broadly speaking, it appears that the Russian operation was designed to infiltrate conservative organizations.”

The McClatchy report, which quoted two anonymous sources familiar with the FBI investigation, said it was unclear how much money Torshin might have donated to the NRA. The report said the NRA made most of its donations through campaign finance entities that are not required to disclose their donors. The NRA did not respond to a request for comment from ProPublica; the organization also did not comment in the McClatchy article.

ProPublica called and sent emails and text messages to the press office of the Central Bank of the Russian Federation to request comment from Torshin. A spokeswoman, Marina Ryklina, responded Friday to say that the bank had not been commenting on the matter, but would review the request.

As Torshin began building his political profile in the U.S., he also became the focus of a Spanish law enforcement crackdown on a wave of Russian mobsters who came to Spain in the 1990s and 2000s to escape violence at home, launder money in real estate and tourism enterprises, and extend their reach in international business. ProPublica reviewed case files and interviewed investigators in Spain last year for a report about Russian organized crime and power networks.

Although Spanish prosecutors ultimately decided not to charge Torshin, they considered him the top suspect in an investigation that included his intercepted calls to suspects in Mallorca, as well as information provided to Spanish authorities by the FBI, court documents and interviews indicate.

“The arrest of Torshin had been approved,” a senior Spanish prosecutor, José Grinda González, said in an interview. “The thesis in August 2013 was that he was at the top of a criminal structure dedicated to money laundering ... We still consider him the investor who injected money into this structure in Spain.”

Torshin was a banker before becoming a leader of Putin’s United Russia party and being elected to the Russian Senate. In 2005, he oversaw a politically sensitive legislative probe into the Beslan massacre, a chaotic incident during which at least 330 people died after Chechen terrorists barricaded themselves in a school with more than a thousand hostages, many of them children. Despite allegations that Russian security forces botched the siege and showed little regard for the safety of the hostages, the inquiry absolved them of any responsibility. It was criticized as a result.

Spanish court documents allege that the roots of Torshin’s alleged ties to organized crime date back to the mid-1990s, when he first served at Russia’s Central Bank as a mid-level official and became friendly with one of his subordinates, Alexander Romanov. While Torshin went into politics, Romanov pursued a business career, serving as an executive at the Rosneft energy company and a distillery, according to court documents. But Romanov also ran afoul of the Russian authorities, according to Spanish court documents, which linked him to the powerful Taganskaya mob of Moscow.

Romanov and associates in the Taganskaya gang allegedly participated in criminal operations known as “raids,” in which gangsters used force to take over companies, according to court documents and interviews. In 2005, Romanov was convicted of financial crimes in Russia and served prison time, according to the Spanish documents.

Romanov remained a friend and business associate of Torshin, forging an alliance that bridged politics, business and crime in a manner typical of the Russian underworld, Spanish officials said. Another Russian lawmaker, Vladislav Reznik, faces trial in Madrid this year on charges of having a similar business and political relationship with a Russian crime boss, Gennady Petrov.

Torshin also did business and communicated with other suspected Taganskaya figures, according to the case file. On July 12, 2013, an FBI agent working on organized crime issues at the U.S. embassy in Madrid provided Spanish investigators with a memorandum on the Taganskaya gang, including figures identified by Spanish documents as associates of Torshin. The memo shows that the FBI had been tracking the Russian group since the 1990s.

The FBI described the Taganskaya mob’s involvement in illicit corporate “raids” in Russia and suspected money laundering in New Jersey, according to the memo. It also says that a Taganskaya figure described by the Spaniards as an associate of Torshin “may have been running financial operations for deceased thief-in-law Vyacheslav Ivankov” — a notorious mobster who during the 1990s spent time in New York and reportedly lived in Trump Tower for a while.

But the FBI memo does not mention Torshin. The FBI did not provide the Spanish with information about the Russian politician, Grinda said Friday. The Spanish authorities relayed their evidence and suspicions about Torshin’s role in the case to the FBI, he said.

Court documents in other cases show that, during the past 15 years, the FBI has often played a significant behind-the-scenes role supplying information to Spanish investigators about Russian gangsters and politically connected oligarchs with ties to Spain.

Spanish police zeroed in on Romanov in 2010, soon after he purchased the Hotel Mar i Pins, which stands atop a hill at the end of a beachfront promenade in the idyllic Mallorcan town of Peguera. Romanov spent at least $15 million on buying and renovating the four-star, 150-room hotel, and moved into a villa next door, according to court documents and interviews. Police quickly suspected that he was part of an influx of mob-connected Russians who came to Mallorca and other Spanish resort areas in the 1990s and 2000s, documents say. 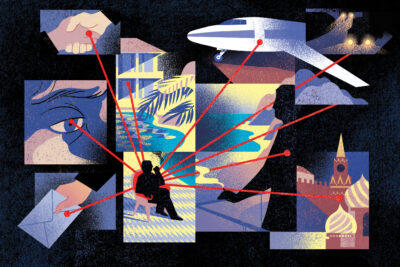 The Spaniards’ surveillance soon detected Romanov’s relationship with Torshin, then a senator, according to documents and officials. Investigators intercepted a series of calls between the two men, some from Torshin’s Senate office in Moscow and others from cellphones belonging to Torshin and his wife, documents show. The intercepts and other evidence led investigators to believe that Romanov and other suspects helped launder Torshin’s money through the hotel and also scouted investment opportunities for him in Spain.

In some of the telephone calls, Romanov and his associates referred to Torshin as “the boss” and “the godfather,” according to an investigative summary of the intercepts. Romanov stated that “his godfather” secretly owned up to 80 percent of the shares in the hotel, according to court documents. In other calls, Romanov indicated that the politician was interested in acquiring another hotel and that “managing the hotel through third parties would be better” for Torshin.

In a conversation with Romanov in February of 2013, Torshin “clearly offers to ‘exert pressure’ to achieve what he, Romanov and Gavrilov want,” an intercept summary says. “Torshin tells him to call today or tomorrow first thing in the morning to talk about how and who to pressure because now he has new possibilities of talking [to someone] in a more ‘serious’ manner.”

By the summer of 2013, prosecutors concluded they had enough evidence to arrest Torshin, according to Grinda and other investigators. Investigators learned that the Russian senator planned to fly to Mallorca to celebrate Romanov’s birthday in August, officials said. Police planned to deploy officers at the airport and the hotel to arrest him upon arrival.

But for reasons that remain unclear, Torshin canceled his visit just two days before the flight, investigators said. Officials believe that a dispute in Spanish law enforcement about the decision to make such a diplomatically sensitive arrest may have led to a leak that reached Torshin. Torshin would have been the most powerful figure arrested in Spanish cases that have targeted Russian Cabinet ministers, elected officials, security chiefs and oligarchs.

Prosecutors decided not to charge Torshin because suspects cannot be tried in absentia in Spain and the case could have been paralyzed, Grinda said. In a plea deal in 2016, Romanov was convicted of lesser charges of money laundering and falsifying documents and was sentenced to three years and nine months in prison.