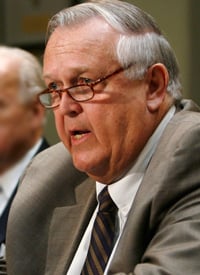 Earl Devaney, the stimulus accountability guru, is seeing something in Recovery.gov's future.

"My vision here is that every reporter in America will wake up and click on this site and be looking for problems," Devaney told 130 city and county officials at a stimulus conference in Washington this afternoon. "They've already started, by the way."

That's one reason Devaney and other stimulus honchos in Washington are warning officials to be careful about what they ask for when it comes to stimulus cash.

"That's going to generate for all of us, you included, inquiries - ‘hey, why did this toilet cost whatever'," he continued.  (Side note: We reported last week on flush federal agencies, anxious to renovate water closets across the country.)

Other projects we've covered, like liquor warehouse skylights don't sound good on paper, even though they are mere components of larger, well-regarded projects. Just to be safe, the Deputy Secretary of Transportation, Adm. Thomas Barrett, urged state-wide officials, at a similar meeting last week, to avoid "projects that are going to look stupid or be stupid."

Devaney's independent Recovery Accountability and Transparency Board doesn't even have phones or offices yet, but he plans to take over the official Web site in 30 to 45 days. The Web site, which is the main medium for sharing accountability information with the public, is currently under the charge of the Office of Management and Budget, an executive branch agency that ultimately reports to President Obama. The site's getting 3,900 hits per second, Devaney said.

Vice President Joe Biden also asked the local officials to help the administration avoid embarrassments, like neighborhood opposition to infrastructure projects: "Educate your public so there's not this ‘not in my backyard, not here.'" Yesterday, the Wall Street Journal reported on local hang-ups that would delay a bridge project Biden had just praised for its "shovel-readiness."

If anyone builds a swimming pool, Biden warned, ""I'll show up in your city and say this is a stupid idea."

The local officials are being asked to take on a big share of the transparency and damage-control work, such as checking lists twice for questionable looking projects, and funneling information back to Recovery.gov, but, Devaney acknowledged, the bill won't pay for state or local auditors to take on those new tasks.