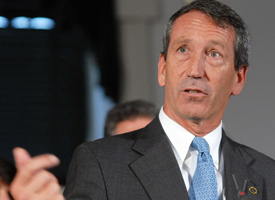 After a long standoff, South Carolina Gov. Mark Sanford has said he will accept some, but not all, of the stimulus money. Certifications that allow states to seek stimulus funding are due in Washington today, and Sanford's staff says he'll send his letter today, making him the last governor to do so. But this game of chicken is pure politics.

Four other Republican governors have joined Sanford in protesting the $787 billion stimulus package, intended to thaw the economic crisis, and say they will refuse some of the money. But the certification, which basically just paves the way for state agencies to apply for the various money pots, has nothing to do with those objections. The governors have used the certification to voice specific objections anyway.

Democrats in Congress played politics with the certifications, too. Today's deadline was set up to get governors on the record accepting stimulus money. They have to sign a generic letter and send it to Washington before they’re allowed to apply for any specific funds, federal officials say. The letter doesn't mean they have to apply for, or spend, any money at all.

News reports have further blurred the significance of today's deadline by implying that the governors' certifications come with "caveats," when, in fact, their certifying letters simply answer a yes-or-no question: The state governments are willing to apply for some funds.

"They don't have to say this and not that [in their certification letters]," explained Tom Gavin, a spokesman for the Office of Management and Budget. "They just have to say they will accept some of the money. Otherwise they can't accept any of the funding," he told us.

The Republican governors say they won't ask for all the money because the states may have to pay for expanded programs like Medicaid and unemployment insurance after the stimulus pot runs dry. Alaska Gov. Sarah Palin, who seconds Sanford's objections, noted in her certification letter (PDF), "Federal stimulus funding must not add to strained state budgets nor diminished state sovereignty by imposing mandates, now or in the future."

Her press release announcing she would except some funds also said she would reject money that may not create jobs, like National Endowment for the Arts grants. Louisiana Gov. Bobby Jindal, Mississippi Gov. Haley Barbour and Gov. Rick Perry of Texas have also said they will reject funding.

Anticipating South Carolina's certification today, Joel Sawyer, a Sanford spokesman, told us, "Our certification would exclude stabilization funds," a provision of the bill that has become central to the governor's fight against the stimulus. Sanford wants to use the money to pay down debts, but the White House insists it is meant for things like school construction.

Certification officially opens the door for funding applications, but the governors alone have the authority to apply for certain money pots, like the state stabilization funding, according to a Congressional Research Service analysis (PDF) of the bill. Once they certify, they may not be able to control other portions of the funding. Palin, for instance, would be hard pressed to keep Alaskan artists from applying for grants from the National Endowment for the Arts, a part of the stimulus she's criticized.

Rep. Jim Clyburn, an influential Democrat from South Carolina, anticipated that Sanford may reject funding and addedthe provision requiring governors to certify the stimulus. If the governors refused, state legislatures could certify the bill, the provision says.

Today's deadline is effectively a "trip wire" that would have caused legislatures' certification powers to kick in if governors hadn't signed off, said Republican state Sen. Tom Davis, Sanford's former chief of staff.

The Congressional Research Service's report, a letter from OMB (PDF) to Sen. Lindsey Graham (R-SC) and an opinion from South Carolina's attorney general all acknowledge the legislature's authority to override the governor on certification but also agree that the provision doesn't give legislators the power to take charge of specific funding streams that governors control, like the state fiscal stabilization fund.

Davis said he "respectfully differs" with his former boss about the stabilization money and hopes South Carolina will be able to use the fund for one-time school improvements, though not long-term increases in government education spending. Sanford has opposed the money unless he can use it to pay down debts, saying the state can't afford to spend on things that will generate long-term costs, such as hiring new teachers.

South Carolina could use the help: The state has the second highest unemployment rate in the country (11 percent), lower teachers' salaries than most states ($45,758 on average) and a higher rate of uninsured people (16 percent), according to data compiled by ProPublica.

"I think there's a way of working this thing out," Davis added. After certifying the bill today, Sanford will have bought himself some more time to do so, despite all the deadline hoopla. The last third of the stabilization cash won't start to flow until sometime later this summer, and South Carolina's certification today means Sanford has plenty of time to change his mind.