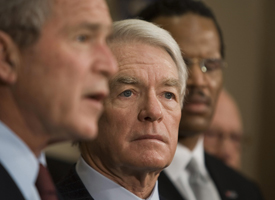 Even as the Dow flirts with the 7,000s, not everyone is suffering. The Wall Street Journal today looks at CEOs in companies directly related to the financial crisis -- including mortgage financers and insurers, student loan companies and home builders -- who have done quite nicely, thank you very much.

The Journal's analysis looks at executive compensation and stock sales for the period between July 2003 and June 2008. At the top of the list of those who enriched themselves is Charles Schwab, CEO of the brokerage firm of the same name, who took home $816.6 million largely in sales of his shares.

While Schwab's company continues to hold up well during the crisis, others have sunk. High-profile names on the list include congressional enemy No. 1 Richard Fuld ($184.6 million) of Lehman Brothers and James Cayne ($163.2 million) of Bear Stearns.

The Journal points out that others got rich quietly, and in delightful settings. Meet Daniel Meyers, 46, the chief executive of First Marblehead, a Boston-based company that helped banks provide high-interest student-loan services to those who had exhausted federally funded options:

In 2004, Mr. Meyers bought a Spanish-style villa in Newport, R.I., the summer retreat of industrialists a century ago. He paid $10.3 million for the estate, on 45 acres with sweeping views of the Atlantic. Mr. Meyers tore down the villa and is constructing a five-building, 38,000-square-foot compound called Seaward with a carriage house, a guest house and a caretaker's cottage. Mr. Meyers also owns a 66-foot sailing yacht, which he recently raced to a win at the famed Newport Regatta.

Meyers cashed in his $95.8 million before the downside of subprime student loans caught up with his company:

In the credit crunch, First Marblehead's business ground to a halt after investors abandoned private student loans, which are experiencing rising defaults.

The Journal paints the lavish lifestyles of several other CEOs, including Michael Gooch, 50, of credit-default swap broker GFI Group, Inc. With a $82.5 million payoff, he is at no risk of default himself:

Mr. Gooch says his only major debt is a $1 million mortgage. "It could be paid off with the spare change in my bank account," he says.

The analysis doesn't include most golden parachutes or stock options, unless they were sold.