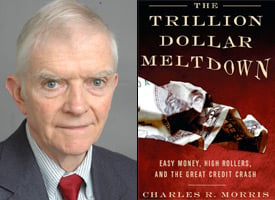 Charles Morris is one of the sages of Wall Street. A former lawyer and banker, Morris published a book in January that predicted, as the title puts it, "The Trillion Dollar Meltdown." We talked to Morris about why he now thinks he underestimated the problem, why the government is "doing the whole thing wrong," and where he's putting his cash now.

Obviously, looking at the behavior of the stock and credit markets, there's already worry that the bailout is failing and...you're laughing...

Well, I was not a fan of the bailout, so I wouldn't want to impose my thought processes there.

Why not? Your perspective seems legitimate.

My problem with the bailout is other people can invest in banks, and they don't have to take back bad assets. I'd like to see that -- I would have preferred the government give lots of money to the bank, take back equity of some kind or a debt of some kind, and have the banks put the bad assets in their own bad bank.

I watched the [Resolution Trust Corporation, which liquidated assets from banks that failed during the S&L crisis] and it was a complete scandal. Now this could be much worse, because now we're actually buying assets. It's going to be putting the government to a test that is bound to fail.

The notion that all that was needed in the market was confidence is kind of a classic political error. The problem with the market is that assets have been grossly overpriced and are now triggered or sort of scaling on down back to something like real values, and they've got quite a bit further to fall.

It is a real mess. On the other hand, as Barney Frank said when the bill passed, when you go and ask 535 people what kind of a bill they want, this is what you get. In the real world, this is going to be a total mess no matter how it's done. Government is a very blunt instrument.

To what degree would that alternative plan, of the government buying stakes in banks, have been better in terms of putting the brakes on the meltdown?

I'm not sure that the market shouldn't fall. People seem to think that the market is undervalued now. I don't think so. The market may be falling to the right level -- and it's probably not even there yet.

Paul Volcker [the Fed chief during early 1980s] said in somewhat similar circumstances, "Well the real problem here is that we've done too much God damn lending. And we're going to stop it and make everybody leverage back down." Which is what he did. And he did until all the inflation was reamed out of the system.

It seems everything the federal government is trying now involves trying to keep the leverage ball rolling.

You argue in your book that Americans overall have been living beyond our means and doing so on credit. As a society, we're going to have to scale back spending.

Right and the sooner that we get that done the better. So why throw another trillion dollars at it to try to make the credit go faster?

I think we're probably doing the whole thing wrong. The Paulson plan will be dragging and dragging it out.

Yeah. It's time to force people to deleverage [i.e. use less borrowed money for investments].

Isn't the risk that…

You get a nasty recession. Now that's what Volcker did. He over saw the worst one-year drop in GDP since World War II. And that fixed things.

But weren't you just saying that we've got to pump money into the banks?

You have got to recapitalize the banks. But if the government owned the banks, which is what would have happened in an equity-stake plan, you could keep on lending and you could throw out the bones. You'd have tough rules that you can't have leverage more than X. You got to sell off all this shit and just really work balance sheets down fast, which is what would happen. It's like what they're doing with AIG now.

So in other words, you staunch the bleeding, but then...

You crunch it down. The banks that are in such terrible trouble that they got to run to be bailed out ought to get owned by the government for some period of time, much as AIG is.

So is it safe to say then that you think despite what we've gone through so far, we're still not over the bubble that we were in?

Oh no, not at all. We haven't gotten to leveraged loans yet. The junk bond market -- I'll call it the high-yield bond market -- is going to have terrible troubles all through 2009 and 2010. The home mortgage market still has huge swaths of loans out there that are going to get violently repriced in 2009 and 2010. Credit cards are just now starting to get nasty. Default rates are really starting to spike up.

And there's a new version of your book, which is called the $2 Trillion Meltdown.

That would be the paperback version. And scary as that number is, it assumes an orderly deleveraging. That's not the way large scale market reversal works.

There will be margin calls, panic sellers, flight from all risky assets. So the temporary losses can be double or triple that, you know.

We'll probably overshoot. But I think we're in the first stages of a disorderly deleveraging process.

Sounds much nicer when you just call it a disorderly deleveraging process.

And if you were to rank your own fear at this stage?

I've put all my money into cash.

I did in 2005. And I sold my apartment. It was a high maintenance building. There was some underlying problems with the ground lease. So if the prices started to fall, I figured my apartment would fall faster.

And how's the price of the apartment now?

Well I think it's probably higher than when I sold it. But it won't be for much longer.