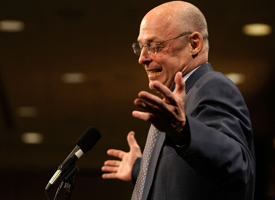 This week was the big rollout for Tim Geithner's new plan (or "broad architecture") for the bailout, but even as we're introduced to a whole new slate of program titles and acronyms, the old programs and acronyms live on. For instance: Last Friday, the Treasury invested $239 million in 28 banks, part of the prior administration's strategy of investing in banks throughout the country.

The investments were made under the same terms as past Treasury investments, meaning the executive compensation limits President Obama announced last week do not apply. Nor will they apply to any future investments made under the so-called Capital Purchase Program -- which will be quite a few, since Treasury plans to use $250 billion for the program and has so far invested only $195.6 billion in 386 banks. More than 2,000 have applied. Treasury has been approving them bit by bit, investing in 20 to 50 banks each week. All indications are that pace will continue. As always, you can see a full list of the participants on our comprehensive list of bailout participants.

Most of the new investments are relatively small. The biggest last week was $55 million to New Jersey's Lakeland Bancorp; the smallest was $301,000 to Freeport State Bank in Harper, Kan. But some major financial institutions are still waiting to see if they'll be approved, such as insurance companies that have acquired banks in order to qualify for the program.