“If you need any help, just holler,” poll worker Albert Friddle told a voter as he walked her through the new system.

She didn’t holler. Using a machine the size of a briefcase, she selected her choices, printed and double-checked her ballot, and dropped it into a secured blue box provided by the county.

Indeed, the day went without anyone hollering.

The scene in Mississippi, if modest in its particulars, was seen by some as a telling moment at a time of great anxiety about the accuracy and security of the nation’s voting systems.

Mississippi is one of only a few states in the country to allow the use of voting machines that have not been certified by federal authorities, and the state has no certification process of its own. As a result, the machines at work for the first time in Choctaw County last week were built by VotingWorks — a small nonprofit organization founded by Ben Adida and Matt Pasternack. Adida and Pasternack selected the state both for its regulatory environment and because many counties in the state continue to use paperless voting systems, allowing the company, Adida said, to “very quickly improve the security of voting in Mississippi by reintroducing paper.”

The machines, VotingWorks said, were inexpensive to make, easy to fix and no problem to set up and take down. The hope, the organization said, was to produce shorter lines and more reliable results, a wish that seemed realized on Nov. 5.

“To be on the ground floor of something like this as one of the poorest counties in the state, that’s pretty exciting,” said Wayne McLeod, an election commissioner in Choctaw County.

For VotingWorks and the election officials in Mississippi, the fact that the machines had not been federally certified was a plus, not a risk. Set up nearly two decades ago to try and improve the reliability of voting systems, the federal certification process is today seen by many as an impediment to the kind of technological progress urgently needed in the field.

The process — overseen by the federal Election Assistance Commission — is both lengthy and costly. And the long track record over the years of election scandals and controversies makes clear it hasn’t been all that effective.

“Certification can be a double-edged sword,” said David Becker, the executive director of the Center for Election Innovation & Research. “On the one hand, we want and need minimum standards for access and integrity in our voting machines. But on the other hand, certification can be a significant barrier to innovation.”

Experts and election officials across the country have argued that the certification process has helped the small handful of major voting systems companies to dominate without a great incentive to invest in more effective and trustworthy technology.

Last Tuesday, machines made by ES&S, the nation’s largest voting machine company, were at the center of yet another controversy. 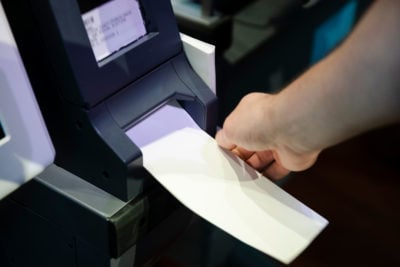 In Northampton County, Pennsylvania, voters suffered through long lines only to learn that the voting results were severely inaccurate, forcing a count of paper ballots.

“I’m shaking here. I have no idea if these numbers are right,” Lee Snover, head of the Northampton County Republican Party, told local media last week. The county executive described the situation as a “three-alarm, raging fire.”

The ES&S machines deployed in Northampton County went through more than two years of development and testing before the episode on Election Day. ES&S did not respond to requests for comment or written questions on how it plans to proceed in Northampton.

Northampton County Executive Lamont McClure said that it may be several weeks before the cause of the problem is determined. “It wasn’t great,” he said. “We must fix it.”

In an interview last month, Ben Hovland — vice chairman of the federal voting assistance agency — recognized that the certification process was often too slow to spark innovation. The standards are currently being updated (a process that has dragged on since 2015), which he says is allowing the agency to rethink a variety of issues.

“I think it’s a great time to really step back and look at the process as a whole and see if there are ways that we can make it better make it more efficient,” he said.

Adida and Pasternack, the VotingWorks officials, said its machines were first tested in Mississippi in a single precinct in Choctaw County during the state’s primaries, monitoring for problems and features that confused voters and poll workers. After the initial trial and a second user test at a retirees potluck lunch, the county election commissioners enthusiastically allowed the company to test the machines countywide during the general election on Tuesday.

“When the other commissioners saw these machines, they said, ‘We want these in November,’” said McLeod, the Choctaw County election commissioner.

VotingWorks machines are housed in a black case, light and easily carried by poll workers, many of whom can be older. The case contains a simple touch-screen tablet that can be purchased off the shelf and that has custom software installed on it. Voters are given a card by a poll worker that has a chip in it loaded with the appropriate ballot, and they install it in a card reader so that their ballot pops up on the touch-screen device. When they finish, they take the card to a separate station and print the ballot. The printing station erases the data on the card, and the voter reviews the ballot for accuracy before inserting it into a thick blue cloth ballot box that can be sealed.

Unlike most voting machines, they did not come with a stand and are meant to be propped up on tables. At polling places in Choctaw County — mostly volunteer fire stations — the machines were sitting on top of folding tables. In others, they were on desks. The machines took poll workers less than two minutes to fully construct, shortening lines and keeping voters calm. Poll workers uniformly said they loved this feature, as it made the machines easier to maneuver and take down.

Adida said the company hasn’t ignored existing standards. “We’ve looked at the aspects of certification that we think are meaningful,” he said.

“The certification process would not have helped us with building something that works for poll workers,” said Adida, who said VotingWorks set out to build a product that poll workers with little training could manage securely and set up easily.

Adida and Pasternack recognize that there is justified trepidation around proceeding with machines that haven’t been formally certified, but they said that they are confident that their process will result in a more secure, affordable and user-friendly machine.

“I’ve never seen any technology product built that’s great for users if the users don’t get to touch it for the first two years of development,” Pasternack said.