This article was produced in partnership with Georgia Health News, which is a member of the ProPublica Local Reporting Network.

Georgia Gov. Brian Kemp’s decision to gradually reopen the state for business was beginning to show results. More cars were on the road than the week before. Locals lined up at the drive-thru at the only McDonald’s in Dawson, a predominantly black town in one of the poorest corners of the state.

Peagler headed into Dawson Health and Rehabilitation Center, a small nursing home where 14 of the 60 or so residents had died from COVID-19 over the past month. He and his fellow soldiers conducted their mission with efficiency, quickly testing the home’s surviving residents for the coronavirus. A military medic stuck a swab into each resident’s nose, then dropped it into a vial held by another guard member, who then handed it down an assembly line of soldiers until it was placed in an ice-filled cooler.

“If you were to see us, you would think we’ve been doing this longer than we have,” said Peagler, a native of suburban Atlanta, who, like many members of the Guard, had no formal medical experience before the pandemic. “That’s because we’ve had to pick up on it so quickly.”

As governors begin to reopen states for business, medical experts fear that those most vulnerable to the coronavirus — the elderly, the sick, the poor, minorities — will disproportionately bear the risk of those decisions.

Residents in long-term care facilities now face additional risks of exposure, as staffers circulate through environments where social distancing is decreasing. Some two dozen employees of the Dawson nursing home have already contracted the coronavirus.

In Georgia, Kemp has allowed barbers, bowling alley operators and tattoo artists to reopen their businesses. Restaurants may now resume dine-in service. Governors in Alaska, Oklahoma and South Carolina have also allowed some nonessential businesses to reopen, while their counterparts in several other states have let stay-at-home orders expire this week.

Each new open business presents an additional exposure risk. As nursing home workers or soldiers with the National Guard interact with cashiers and store clerks who may be infected, they bring the risk of that contact with them into those long-term care facilities, unless rigorous safety protocols are followed, public health experts said.

States such as Maryland and Massachusetts have taken steps to mitigate that risk by mandating tests for all workers at long-term care facilities. Georgia does not have such a requirement. It is up to each facility to request tests for its workers.

“If you have a high-risk population congregated in a setting that was already struggling to take appropriate care, it’s a recipe for disaster,” said Dr. Harry Heiman, clinical associate professor of health policy and behavior sciences at Georgia State University.

Dawson Health and Rehabilitation Center is a cautionary tale of the toll already inflicted on vulnerable residents and the dangers they will face as Georgia reopens.

Long-term care facilities in larger metro areas have received national attention for the deaths of scores of their residents from COVID-19 outbreaks. In southwest Georgia’s impoverished “Pecan Belt,” there’s been less scrutiny but a similar toll; Dawson Health and Rehabilitation Center and nearby long-term care facilities have quietly and collectively endured an outsized number of fatalities.

An analysis of state data by Georgia Health News and ProPublica found that 12% of Georgia’s more than 1,100 COVID-19 deaths are from 17 long-term care facilities — a catchall term that includes nursing homes, private care homes and assisted living facilities — scattered across the state’s southwest. The 18-county area where the homes are located accounts for just 3% of the state’s population. Most of those counties have a black population whose percentage is higher than the statewide average of 31%. More than a quarter of residents in those counties live below the poverty line.

Officials with CHSGa, which owns the Dawson Health and Rehabilitation Center, said they had taken steps early to aggressively confront the possibility of an outbreak.

“Dawson Health and Rehabilitation has taken and continues to take active measures to combat the spread of COVID-19,” said Amy Abel, a spokesperson for CHSGa. “We are grieved by the loss of these patients, as well as for the loss of life caused by this virus throughout our state, our nation and around the world.”

Despite concerns about the risk to long-term facility residents, Kemp has insisted on moving forward with his decision to reopen parts of Georgia’s economy.

Kemp said he will maintain a limited shelter-in-place order for “medically fragile” people through June 12. But health experts say Kemp’s decisions to reopen Georgia could not only prolong the risks to the state’s most vulnerable communities, but also to workers who serve them.

“By the time a nursing home staff member or resident has COVID-19 symptoms, you are 100% too late,” Barnett said. “There’s simply too much mingling across all the staff and residents in any nursing home, even if they shut down communal dining and visitors.”

The troubles inside Dawson Health and Rehabilitation Center — which have not been previously reported — first surfaced in late March, when Georgia’s Army National Guard conducted “recon” missions at senior care facilities in the region.

After visiting the Dawson home on March 27, Capt. Matthew Rushing called his superior officer, Brig. Gen. Randall Simmons, with some troubling news, according to interviews and emails obtained by Georgia Health News and ProPublica.

Nineteen patients had been tested for COVID-19 in the 74-bed facility. The first patient test had just returned positive. Rushing feared it wouldn’t be the last.

During his visit, Rushing saw a disregard for basic mask and gown protocols. Residents had even mingled inside the facility, not keeping a safe distance from one another. Rushing wasn’t a medical expert, but he worried about sending his company members into the nursing home. Their mission was to sanitize facilities — and, with any luck, save lives. Their risk of COVID-19 exposure seemed too great.

Troubled by what he heard, Simmons typed out a summary to share with other high-ranking officers, including Maj. Gen. Thomas Carden. “I bet they all will have it in the end,” Simmons wrote in a March 27 email obtained by Georgia Health News and ProPublica. He added, “This virus runs through nursing homes like the Grim Reaper.”

A public health veteran who had once overseen infectious disease initiatives at the Centers for Disease Control and Prevention, Toomey had recently caught flak for her department’s slow rollout of COVID-19 testing and for capturing incomplete data about the growing pandemic. Recognizing the urgency of Simmons’ update, Toomey immediately tapped out a message from her iPhone, promising to get the issues resolved.

“This is even more concerning than I thought,” she told Carden. 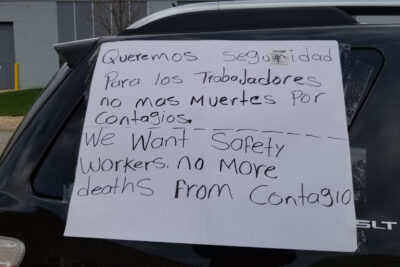 What Happens When the Workers Who Make Hand Soap Get COVID-19? They Protest.

After a worker at a beauty supply factory near Chicago died of COVID-19, her former co-workers staged a protest. But they didn’t seek help from OSHA. They sought help from a new advocate: the state attorney general’s office.

In an emailed response to questions, Abel, the CHSGa spokeswoman, did not specifically address Rushing’s allegations.

Abel said CHSGa nursing homes had enacted hand-washing protocols, ceased new patient admissions and screened its staff for respiratory symptoms prior to the Guard’s visit. The Dawson Health and Rehabilitation Center administrator also notified family members that their loved ones tested positive for COVID-19, and sought additional federal and state guidance on responding to the outbreak.

“Close, intimate care is provided multiple times throughout each patient’s day,” Abel said in a statement. “Out of necessity, social distancing between a patient and care giver is not feasible.”

Toomey’s concerns were well justified. Dawson and other long-term care facilities in southwest Georgia have proven especially vulnerable to COVID-19.

As of the latest information, nearly every resident at the Joe-Anne Burgin Nursing Home, 20 miles to the west of Dawson, has contracted COVID-19. Twenty miles southeast, PruittHealth-Palmyra nursing home has had positive tests for 120 residents and 47 staff members.

Representatives of companies that oversee eight of the 17 long-term care facilities that reported COVID-19 deaths in that stretch of southwest Georgia said they took early precautions against coronavirus following the news of the nation’s first deadly nursing home outbreak in Kirkland, Washington, at the end of February.

Multiple long-term care facilities did not respond to interview requests.

Dawson Health and Rehabilitation Center lies in Terrell County, population 8,500. The county has long been a federally designated “medically underserved area,” with two of the nearest rural hospitals closing their doors since the Great Recession of 2008. The county currently has an infection rate of 1,972 cases per 100,000, one of the highest in the country.

As a state, Georgia has one of the highest fatality rates inside long-term care facilities, accounting for 41% of the state’s COVID-19 deaths, over 50% higher than the average for the 23 states that had publicly reported death data as of April 23, according to a study by the Kaiser Family Foundation.

“By the time everybody knew, and started reacting, it was too late,” said Ernest M. Johnson, a Terrell County commissioner who runs a funeral home in Dawson. “It caught us, excuse my French, with our drawers down.”

Several studies have shown that people who live or work in long-term-care facilities are disproportionately affected by COVID-19. Studies have also shown that minorities face a disparate impact. Black people are more likely to have chronic diseases, such as diabetes and heart disease, which are associated with worse outcomes. Those health risks are compounded by widespread structural inequities such as poverty, housing and low-wage jobs.

The result, Heiman said, is that southwest Georgia’s low-income communities of color — including elderly residents who are sick or frail — are facing a “perfect storm” of risk.

On Thursday afternoon, hours before another set of Georgia’s restrictions were lifted, Rushing said the Georgia Army National Guard would continue to conduct testing for nursing homes and assisted living facilities upon request.

Even without a mandate, he said, the Georgia Army National Guard will continue its mission of ensuring that both long-term care facility residents and workers remain safe.

Like so many others faced with this unprecedented pandemic, he could not say for sure whether those tests alone would be enough to do that.

“We’re learning as we go,” he conceded. “We’re building the airplane in flight.”