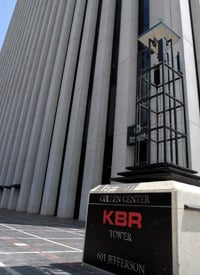 The Pentagon was repeatedlyrebuked in 2008 for lax oversight of its contractors in Iraq and Afghanistan, drawing accusations of gouging U.S. taxpayers and endangering troops and Iraqi civilians. This past year, KBR and Blackwater were responsible for the lion's share of contractor misconduct allegations. Below is our round-up.

KBR, the former Halliburton subsidiary, is the beast of all the military contractors; as of May last year, it had earned more than $24 billion. That's nearly a quarter of the total amount the U.S. has spent on contractors in Iraq.

But KBR's ubiquitous presence in ongoing U.S. wars has also generated a number of problems. It has been accused of bilking U.S. taxpayers on workman's comp and engaging in the human trafficking of Nepali workers. It was accused of installing shoddy electrical wiring in barracks in Iraq and then ignoring warnings to fix it; 18 people have been electrocuted. A subsequent Pentagon investigation of the wiring determined that KBR was guilty of "serious contractual noncompliance."

Around the same time that the Pentagon report came out, Military Times published a disturbing investigation of KBR's massive "burn pit" at Balad, the largest U.S. base in Iraq. According to a 2006 memo from an Air Force official, the pit was burning plastics, paint, Styrofoam and medical waste, including amputated limbs. A resultant smog of toxic, cancer-causing chemicals hung over the base, and several GIs have reported illnesses. In late November, a former Air Force employee filed a suit against KBR. In addition to the burn pit, the suit alleges that KBR served troops rotten food, contaminated water and ice that had been transported in trucks that "still had traces of body fluids and putrefied remains in them." KBR declined to comment to the Times.

KBR is also facing a lawsuit from 16 members of the Indiana National Guard who are accusing the company of knowingly exposing them to hexavalent chromium (the cancer-causing chemical made famous by Erin Brockovich) at the Qarmat Ali water treatment facility in Iraq in the months following the 2003 invasion.

At a Senate hearing in June, a former KBR employee accused the company of initially downplaying the chemical as a "minor irritant at worst" (PDF) and ignoring evidence from a U.N. report that warned of the chemical's risks. The Army is conducting its own investigation. KBR told CNN that it notified the Army Corps of Engineers immediately after discovering the chemical, and its efforts to clean it up were deemed sufficient.

Blackwater is a much smaller company, but it's still managed to garner a significant amount of notoriety. In September 2007, Blackwater employees fired on a group of civilian Iraqis in a widely publicized incident at Nisour Square; 17 people were killed.

In November, the Justice Department charged five of those employees with manslaughter. The guards have defended their actions by saying they were fired upon first, but testimony from a sixth guard who has cooperated with the FBI suggests otherwise. Attorneys for the five guards lashed out at the government for "second-guess[ing] split-second decisions" made in a war-zone.

Blackwater has also been accused of skirting federal laws prohibiting private entities from buying automatic weapons and misrepresenting its size to win contracts reserved for small businesses. The company is also facing huge fines from the State Department for shipping weapons to Iraq and Jordan without proper licensing. A federal grand jury in North Carolina is also investigating whether or not Blackwater smuggled weapons into Iraq in giant sacks of dog food.

And in a final blow to Blackwater, a recent draft report from the State Department inspector general indicates that Blackwater might be losing its license to work in Iraq very soon.

Obama has pledged to reduce U.S. reliance on private security contractors like KBR and Blackwater, but NPR notes that it won't be so easy to break the addiction.