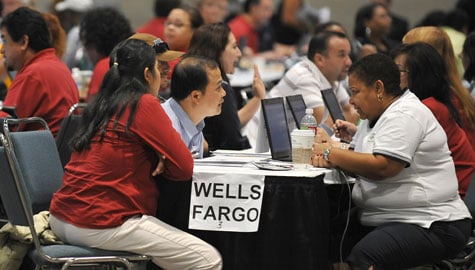 The administration’s big mortgage modification program features $50 billion worth of carrots – but the stick part has been largely absent. Today, the Treasury Department announced it is increasing oversight of mortgage servicers, and made a vague threat of unspecified penalties against companies that don’t play by the rules of the loan-mod program.

When pressed on a call with reporters today about what those penalties might be, Assistant Secretary Michael Barr said he didn’t “want to get into the details,” except that the Treasury would use “the full range of authorities that we have.” For now, Barr said, he wanted to focus on pressuring the companies participating in the program to perform better.

The Treasury has focused on publicly shaming the less-effective servicers as its “only tool for accountability,” said Diane Thompson of the National Consumer Law Center. She added that it was a “fundamental problem in the way the program is set up,” that Treasury does not have a way to adequately punish misbehaving servicers. “It’s an open question whether shame is enough.”

The administration’s program was meant to curb surging foreclosures by encouraging mortgage servicers to modify troubled loans. The program involves a system of payments to servicers, investors, and borrowers to make it in their interest to modify the loan rather than foreclose (something we explained in more depth here). The administration has said that it aims to help 3 million to 4 million homeowners, but the program has been beset by difficulties.

It remains unclear exactly what Treasury’s “full range of authorities” are, or how Treasury might exercise them. Take, for example, servicers that appear to be wrongfully denying homeowners modifications (a problem we’ve highlighted in earlier reporting). The contracts Treasury signed with each servicer in the program allow the government to withhold incentive payments or kick them out of the program. But it’s unclear if Treasury would punish that servicer by withholding future loan-mod payments. Thompson said she understood Treasury’s only real remedy would be to threaten to boot the servicer from the program.

Treasury’s announcement today focused on one of the central problems for the program: Getting homeowners from trial modifications into permanent modifications. TARP chief Herb Allison testified near the end of October that the number of permanent mods was “less than 10,000.” Treasury has yet to announce how many modifications have become permanent, but will start reporting that number next week.

Homeowners tentatively approved for a modification under the program – as we’ve reported, no easy feat – start with a three-month trial period. That’s supposed to be enough time to not only ensure that the homeowner can make those reduced payments, but also that there’s enough time for homeowners to send the servicer the required documentation (including verification of income and an affidavit swearing that the homeowner is having difficulty making the mortgage payment). So far, that hasn’t been enough time.

Assistant Secretary Barr said today that the “overwhelming majority” of homeowners have been able to make the trial payments. The problem has been the documentation. Treasury officials said that approximately 375,000 of the trial modifications will have gone through the trial period by the end of the year. But it’s still unclear what portion of them will get permanent mods. Treasury says less than half of the 375,000 have submitted all the required documentation. Barr put the blame for that on servicers and borrowers alike: the servicers for not processing documentation when they receive it, and borrowers for not being prompt in sending it in.

Since the beginning of the program, there have been ample reports of homeowners’ frustrations dealing with the servicers. Many homeowners say they’ve faxed in the same documents over and over, have gotten conflicting advice, and have generally suffered through a kind of customer service hell.

Treasury said today that it would address those problems by sending “SWAT teams,” as Barr described them, of Treasury and Fannie Mae employees to the offices of the biggest servicers. (Fannie Mae is administering the program.) Despite the connotation of black-clad police kicking in doors, three-person “SWAT teams” will simply be charged with assessing how a servicer is processing the documentation and whether it can be improved. Nevertheless, this does appear to be the closest oversight of the servicers that Treasury has exercised in the program so far. (As we’ve reported, Freddie Mac, tapped as the program’s auditor, has not impressed.)

Treasury officials said they would release a report next week that will show how many trial mods each servicer has so far converted to permanent mods. We’ll post the results, as we do every month.